Loretta M. says she is sure she was given Trasylol during her open heart surgeries because her doctor spoke about using blood-regulating drugs during surgery. She had two open heart surgeries and experienced serious side effects after both. Like many people, Loretta is upset that Trasylol was used despite the risks associated with the drug.

"My first surgery was in December, 2001. After the surgery I didn't feel well. I was just totally out of it. I was slow, my speech was slow—there were a lot of things that I couldn't understand that were happening to my body. The doctors just told me that it was normal and would go away. 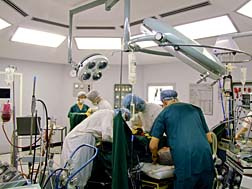 "I was continuously going downhill. I slept all the time and I had no energy. I also had difficulty breathing. Doctors told me I had depression and then said I had fatigue—they gave me different excuses for what was happening.

"After my husband died I started gaining weight. I went to the doctor and my stomach looked like I was pregnant. He said I was filling up with water and needed another surgery.

"I had another surgery in September 2007. When the anesthesiologist put the catheter in my hand, my fingers became paralyzed and I didn't feel well. About a month later, I started having problems with my eyes. I was scared. The doctor sent me for a stress test and I was given an ace inhibitor for congestive heart failure. I was told to take that with Lasix to hopefully help me get more strength. I haven't had strength since then. In fact, I feel like I'm dying.

"I still have difficulty breathing, I can't walk far, my legs are heavy and I have edema. I was very active before the surgery; even with the bad heart I felt better before than I did after the surgery.

More News
"The doctor told me, before the surgery, that he does 'transfusionless surgeries,' that he has a special drug that regulates the blood when you're under [Trasylol is used during open heart surgery to reduce the need for a blood transfusion]. That's how I know I got Trasylol. I've phoned the office to confirm it, but I haven't heard back yet.

Patients are now looking into a lawsuit against the maker of Trasylol, alleging they were not adequately warned about the risks of the drug. Those risks include increased risk of heart attack, stroke, congenital heart failure and kidney failure. If you believe you or someone you love had a severe reaction to Trasylol, contact a lawyer to discuss your legal options.