Trasylol: "It's somebody's fault, it's not mine."

Like many older workers with long experience, Roy Bishop chose to stay on the job long after he could have retired. That was his plan but Trasylol, Bayer's clotting drug, may have put an end to that.

Trasylol was used during surgery to reduce bleeding. Bayer pulled it from the market in November 2007 after studies found that it placed patients at greater risk for both kidney failure and mortality during bypass surgery.

"I could have retired at 62, but I liked my job and they seemed to be able to use me well, which makes you feel pretty good," says Bishop (not his real name pending possible legal action). "I worked for Boeing Aircraft—I was 77 and I went to a meeting every week about the C17 transport aircraft, and my word played a big role in whether they flew the plane or not...I served a purpose. I always told my wife and friends that I wasn't quitting; I would die at my desk, because I liked the work." 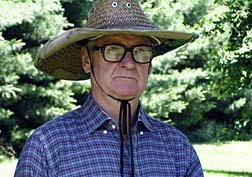 When Bishop underwent triple bypass surgery at the Tri-City Medical Center in December 2006, he says, "Except for my left eye, everything went well.

"After the surgery, they asked me if I could see okay. They knew at the time of surgery that a small stroke had occurred, I don't know how. They didn't say it was their fault." Bishop could not see okay; he lost much of the sight in his left eye as a result of the stroke. He has suffered other effects as well, including memory loss and confusion.

"I've thought about going back to work," he says, "but I sort of stumble sometimes, and I can't remember things quite as well as I used to. I've been off of work for a year. As a result of the operation, my thinking is not as clear as it used to be. I was working right up to my surgery, but now I have something of a challenge getting things straight."

Like many others, Bishop is uncertain whether he received Trasylol during his surgery, and he and his wife have had trouble finding out. Following his surgery, Bishop says, "When we first got my medical records from the hospital, the paperwork came back with a blank spot where you would expect the medication they used to be listed, as if they had purposely left out what they had given me.

"Trasylol is what I had expected that they gave me, because I had looked it up on the web. When I wrote back and questioned them about it, they sent me a corrected document back. It was not the original document, but they had hand-written "Primacor" in the spot where Trasylol would be located. That bothers me.

"I'm not sure why that was. Out of a hundred pages, that was the only space that was blank. A lawyer I spoke to said to get the hospital pharmacy records. I did, and Primacor wasn't listed as a medication they had ordered. I don't know if it's confused or deliberate, but something's missing.

"We spoke to a lawyer, who asked if I had been given blood thinners during surgery; he said that this blood thinner sometimes gave people problems. Two to three percent have eye problems, so it's not malpractice in that sense, but it's somebody's fault, it's not mine.

More News
"The documentation shows that I'm blinded as a result of the operation, and that wasn't my fault, and that hurts. I questioned my surgeon about it, and as a result of all my questions, I heard from his insurance company and answered all their questions about a month and a half ago.

"They said they were sending the information out for peer review to see if someone did something wrong; I'm not sure what they'll conclude, but it probably won't be that they made a mistake, since they're not on my side. I expect they could drag on for three months until I hear from them whether they'll pay me something or tell me to drop dead.

"I wasn't able to return to work. I thought I was going to, I wanted to, but I wouldn't fit in back in. The stroke I suffered during surgery caused the eye problem and the memory problem. I'm unable to drive, and I suffer from confusion. Right now my wife or someone has to take me anywhere I go. Anyway, that's the way it is now."