Did Trasylol Put Husband on Dialysis?

"My husband had a heart transplant in July 2003 and for the last four years, he has had a problem with fluid retention," says Myra H. Now, he is on a dialysis machine—for the rest of his life. "I was told that one of the transplant drugs damaged hid kidneys but after reading about Trasylol in the New York Times, I wonder if that drug was the cause."

Phil, Myra's husband, has been in and out of the hospital since his transplant. "We had been fighting against going on dialysis because it is really miserable," says Myra. Instead, Phil was having an IV diuretic—basically you pee out the fluid—but lately they haven't been able to pull the fluid so he was finally put on a dialysis machine; otherwise he could die of congestive heart failure. 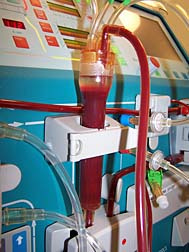 " Phil never had any kidney or liver problems," says Myra. " He was a young 65 when he had the transplant, playing golf, and very active. Now he can't do anything. He doesn't have the energy or strength. Last night he was up all night with burning feet. I gave him five Percosets and not even that helped him. This is not a good way to live.

"I was told by the doctors in the hospital that it was the anti-rejection drugs that damaged his kidneys but with more research, I am finding out that other patients have heart transplants with these drugs and they do not necessarily suffer from kidney failure. Why did my husband?

Then my son (he is an attorney) read the advertisement in the New York Times that said, 'if you had heart surgery and developed kidney disease...'

I wasn't sure he was given Trasylol but it is like parts of a puzzle falling into place.
Then I went online to get more information. Now I am really becoming suspect that this drug caused Phil's kidney failure.

More News
Phil has to go to dialysis three times a week, four hours at a time. He is tethered to this machine with a central line in his chest where they pull the blood out, then it goes through a cleansing mechanism where they put the blood back in. Afterward he is totally wiped out. This procedure will go on forever. I don't want to lose him and he wants to live but he has no choice."

When my son told me about Trasylol, that was the first time I heard about this drug, and I had no idea it had been pulled from the market. That is when I decided to register a complaint with LawyersandSettlements. It isn't an over-the-counter medicine or prescription drug so why would we know about it? We are in Fort Myers and Phil's cardiologist is in Charlotte but I will call him right away and ask for the surgical report. Fortunately, he is an acquaintance of ours so I will get it.

I am so upset and sorry for my husband that he has to go through this. If he was given Trasylol I will be furious—as soon as I found out, I will let you know."