Many patients and their families are still confused about whether or not Trasylol may have had a negative impact on their open heart surgery. With news coming out that the drug is linked to a variety of serious complications, people are scrambling to determine whether or not Trasylol was used in their surgery. Those who have suffered serious side effects from their surgery, such as kidney failure, are now left asking if Trasylol was the cause of their problems.

According to an article in the New York Post, one patient died after eight months in a hospital following heart surgery during which he was given Trasylol. According to the article, the patient had no other health problems except for a tiny heart murmur. But his kidneys failed following the surgery and he wound up hooked up to breathing and feeding tubes, his legs amputated to avoid gangrene. 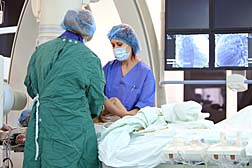 The man's widow has now filed an $80 million lawsuit, alleging Bayer sold a defective product, committed fraud and failed to warn the public about the risks associated with Trasylol. The man's surgeon has since stopped using Trasylol and filed a report with the FDA.

Trasylol has been linked to kidney disease, strokes and congestive heart failure. It is also more expensive to administer than other drugs that appear to be safer. Bayer, maker of Trasylol, is under fire for not disclosing that it knew about the increased risks associated with the drug but did not make that information public.

More News
However, the family members of patients who have suffered complications during or after surgery are now left wondering if their loved ones were given Trasylol. Obviously, there are always risks associated with any type of surgery. However, if Trasylol was used during surgery then the patient may have been exposed to unnecessary risk, especially if Bayer knew about the risks associated with Trasylol.

Patients and their family members are now trying to determine if their complications were simply a normal surgical risk or if they developed as a result of the use of Trasylol. Many are requesting medical records to determine whether or not Trasylol was used in their surgery, especially in cases where loved ones died of kidney failure following open heart surgery.

Some patients survived the serious complications from the use of Trasylol, but they will feel the effects of the drug for a long time. Many require dialysis for their kidney failure. Some are now investigating the possibility of a lawsuit against Bayer, alleging the company did not properly warn patients about the risks associated with its drug.