Trasylol: "I was in a coma for three weeks."

Michael Grosso's troubles date back to 1976, when he was struck by a drunk driver and terribly injured. In addition to a crushed leg, a broken jaw, and other injuries, he sustained several broken ribs that lacerated his aorta. Repairing that life-threatening damage required multiple Gore-Tex patches to his ascending and descending aorta. Thirty years later, he's trying to cope with the results of more recent surgery, and especially with the results of receiving Trasylol during that surgery.

Talking of his original treatment Grosso (not his real name pending possible legal action) says, "All of that work was good, but in 2004 a graft from the aorta to the carotid artery started to leak and saturated one of my lungs with blood. As it accumulated, it would burst and bleed into the lung, sometimes quite dramatically—I would vomit as much as a quart of blood. They couldn't find where it was coming from until they sent me to Mt. Sinai Hospital in Manhattan, where they did an arteriogram and found it. 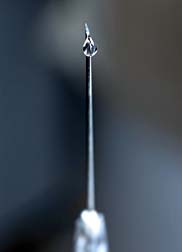 "I had surgery to repair the damage to my aorta and lungs at Mt. Sinai in March 2005. Prior to that, I had several CAT scans and MRIs to find why I was bleeding, where it was coming from. To get better contrast on the scans, I was injected with gadolinium, which I later learned also can cause kidney failure. After that, I made a point of not allowing them to give me that.

"During the surgery, one of the surgeons nicked my spleen and it had to be removed because they couldn't control the bleeding that resulted, so I'm pretty sure they must have administered some clotting medicine to control the bleeding. I still need to get the operation reports from Mt. Sinai to find out if I was given Trasylol. But I think I must have gotten it, because they replaced my entire aorta from my heart to my stomach.

"After the surgery, I was in a coma for three weeks, which was totally unexpected. It must have been a combination of the Trasylol and the spleen removal. During the surgery, they found an infection in the old aorta and in the lung that was saturated with fluid. They wanted to treat me for several months with antibiotics before they performed a second operation to remove the old aorta and the infected lung.

"I needed three more surgeries in June and December 2005 and February 2006 to try to fix an air leak from my left lung. It made a swelling on my back the size of a football—I looked like a hunchback. Originally they thought it was fluid, but it turned out to be air from the lung. It took three times to actually repair it, and I was left with less of a lung on that side because of all the damage, which has made things very difficult for my breathing.

"My kidney failure was diagnosed in June 2006. I'd gone in when I had a problem with swelling, and they took a biopsy and definitely found out I was in kidney failure. I hadn't had any symptoms before then.

More News
"I'm still left with this breathing problem, this lung problem. I've been in for other surgeries to repair an incisional hernia and then just recently in January for another auto accident when I started coughing and hit a guard rail; that was related to the lung problem. I'm in rehab for that now, so it's been difficult to follow up and get all the information related to the Trasylol.

"Since I'm in kidney failure, I'm waiting to get on the transplant list, and I have several donors available, so it's been very frustrating. I'm normally very positive and upbeat, since I work as a psychotherapist with people with anxiety and depression, but this is making it difficult.

"I'm still able to work part time. The accident in January set me back a bit, but I was working one day a week with a social skills group with younger kids. It was nice work. I'm looking forward to getting back to that."