Anthony Moreno's daughter was born with a challenging birth defect that required multiple complex surgeries to correct. This resilient little girl came through the procedures and seemed to be doing well until things took a turn for the worse. Now he wants to find out if Trasylol from Bayer was the cause. It certainly sounds like it.

Moreno (not his real name pending possible legal action) says, "She had a birth defect; she had only one effective ventricle. They had planned a three-step surgical process to correct this; she had her first procedure at five days and another at three months and another at nine months." 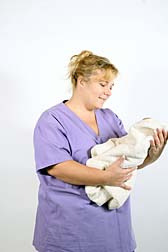 The two-stage surgical repair prescribed for Moreno's daughter after the initial operation is called the Fontan procedure; simply put, it involves redirecting the blood flow to and from the heart and lungs to relieve stress on the child's single ventricle. The two stages are called the hemi-Fontan and Fontan procedures.

Moreno says, "The last surgery, the Fontan procedure, took place when she was just turning four years old, on May 21, 2004. Previously there hadn't been any problems after the surgery with the different stages she had to go through. The hemi-Fontan procedure she had had to go through was pretty complicated and the risks were really high, but she pulled through that really well; even the doctors were surprised how well. There's always a risk in surgery, but because things had gone well so far, we were expecting that the Fontan would go smoothly, too.

"They went to do the last connections, they put her on the bypass machine, and everything went fine, then that afternoon she spiked a high fever. They found out that she'd had a massive stroke in the frontal lobe, then she went into kidney and liver failure and was placed on peritoneal dialysis for three weeks.

"The kidney and liver specialists said that she wouldn't be a good candidate for a liver transplant—in hindsight, I realize that they were trying to be nice about it, but they meant that they didn't think she would make it. But miraculously, her kidneys started functioning and her liver came back, and she made it."

Although Moreno's daughter survived the surgery and its aftermath, the stroke took its toll. Moreno says, "She can't eat orally, she can't speak, and she can't sit up or walk or do any of the things she did before the surgery. So she's like a 34-pound baby. Mentally, she's still there; she remembers her books and toys and things like that, but she can't communicate with us. I believe the technical term is massive cerebral palsy.

"She goes to therapy four days a week. She's made some small improvements, I guess, but she hasn't regained her speech. She has the desire to eat things, ice cream and things like that, but she can't swallow. She tries to communicate with us, and we're trying to find ways to make that better if we can. She's a very gifted, very smart little girl, but she's lost her ability to communicate.

"We're constantly getting new wheelchairs and other equipment in order to make her more comfortable, so she can have a decent lifestyle. Right now, she has two different kinds of chair, one to move her from the van to school and different places, and another high-low chair that supports her with a five-point harness that can raise or lower so she can play with her little brother. We also have a side-lier that helps hold her on her side so she's not constantly lying on her back when she's lying down, and a special bathing unit. Just a lot of different items to make her comfortable.

"I read an article about Trasylol in our local paper and wanted to look into it, because there were so many unanswered questions. I understand that sometimes complications happen for reasons we don't understand, and I personally don't have a lot of anger toward the doctors or the hospital. It's the big pharmaceutical company who had this drug out there and didn't tell us about the possible complications that's the problem; that's the problem I have with this.

"My wife has the release forms and is working on getting the medical records for the time of her surgery. I don't know whether they'll have the information we're looking for. I've researched on the Internet about Fontan surgery and so forth, and Trasylol sounds like the medicine they would have used, but we need to find out for sure.

More News
"I just want to find out what happened. Monetary things are not my big issue, though if there was any, it would go toward the devices we need for her. Finding out if caused this is not going to change anything, what's done is done, but if it can prevent another child's life from being changed like this, that's what I'm really after."

Trasylol, a clotting drug intended to control bleeding during surgery, was pulled from the market in November 2007 after studies revealed that it led to increased mortality both during and after cardiac bypass surgery. It was bad enough that a Canadian clinical trial was called off due to the high death rates among patients who received it. Estimates of deaths linked to Trasylol run well into the thousands.

If, like Anthony Moreno, you or a loved one suffered serious health problems, including stroke or kidney or liver failure, during surgery, Trasylol may be the cause. LawyersandSettlements wants to hear from you.