A couple in Ohio are trying to piece their life together after a transvaginal mesh implant disrupted their life after moving into a new house, according to the Fremont News-Messenger. 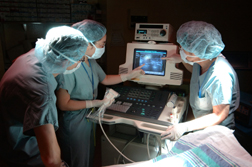 The news source reported that after Teresa and David Sawyer moved into their new home in Curtice, the couple was faced with a medical problem. Her stress urinary incontinence flared up and they sought treatment.

Stress urinary incontinence is a condition that involves the bladder leaking involuntarily, and things like coughing and laughing can trigger the release of urine. To solve the problem, Teresa went to her doctor and he recommended she get transvaginal mesh implanted in her body, according to the news source.

Since the transvaginal mesh was implanted, she has had four surgeries, repeated infections and trips to the emergency room. Her body had allegedly attacked the mesh and rejected it, causing the device to erode inside of her.

More TRANSVAGINAL MESH News
"That's probably the biggest regret I have," she told the News-Messenger. "It just basically destroyed every aspect of our life together. It's hard to deal with the shame of being broke. Part of me feels that the only way to keep my dignity up is to keep other women from going through this."

Due to the level of her suffering, Teresa wanted to warn other women about the dangers of the device, according to the news source.

"That took me out of being able to do pretty much anything," she said of the device. "It's been a rough ride. The pain that mesh was causing me was through the roof."

Teresa told the news source that her life has not been the same and her ability to do normal, everyday things, has been significantly affected.

The US Food and Drug Administration notes that serious complications have been reported with the surgical mesh used to treat stress urinary incontinence and another condition. The FDA received more than 2,800 reports of complications associated with the device.