A transvaginal mesh lawsuit that has gone through a plethora of twists and turns akin to a country road appears to be in the final stages of resolution after a federal judge in California gave the thumbs-up to a proposed $12.25 million settlement. Upwards of 2,710 class members will share in $10.58 million, with the remainder going to attorney’s fees and costs. 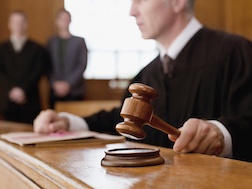 Complicating the mesh lawsuit was the involvement of an insurer tied to mesh manufacturer Caldera Medical Inc. (Caldera), which had manufactured and distributed TVM mesh that are alleged to have caused injury.

According to court documents, multiple TVM mesh lawsuits had been filed against Caldera, one of numerous manufacturers of the surgical pelvic mesh used to treat pelvic organ prolapse (POP) and stress urinary incontinence (SUI) in women. The latter conditions are common in middle-aged women who have borne children. Traditional surgical methods involved using a woman’s own tissue to shore up sagging internal organs by way of invasive surgery. However in recent years, mesh product has been used that can be deployed through a small incision. The move to laparoscopic surgery involving mesh has contributed to faster healing times, less strain on hospital resources as well as less drain on the nation’s blood supply, as there is less blood loss with minimally-invasive, laparoscopic surgery.

However, transvaginal mesh complications have bedeviled thousands of women in recent years, and a host of lawsuits have percolated through the courts brought by plaintiffs who allege TVM mesh is defective, and that manufacturers were negligent.

Plaintiffs having filed lawsuits against Caldera, were soon met with a further complication when Caldera filed insurance claims with its insurer, Federal Insurance Co. (Federal).

The insurer argued that Caldera’s preference to litigate in state court (California) was serving to deplete the $25 million cap on Caldera’s policy. Federal also noted it had already paid out $6.3 million in settlements, and asked the court to certify a class of claimants and enjoin them from pursuing further lawsuits that would serve to impact the insurance policy.

While class plaintiffs having suffered various transvaginal mesh complications waited in the wings, Federal and Caldera ended their impasse and reached an agreement for $12.25 million together with a $500,000 holdback. Claimants in the class would not be able to opt out of the deal, if the settlement achieved judicial approval.

However, objections from 36 claimants filed in June of last year delayed settlement approval. Objectors were seeking an independent audit of Caldera’s financial health, which had already been identified as being in jeopardy, in an effort to determine if the settlement was, indeed the maximum payout possible, and if that payout might have been greater had Caldera liquidated. Caldera and Federal responded with an assertion that an audit was not required given the submission of financial records that already showed Caldera was on a poor financial footing, with its insurance policy as the only means to settle mesh lawsuit claims.

Caldera also asserted that there was no evidence to suggest that liquidated values of Caldera would exceed the value of the settlement proposed.

That wasn’t good enough for US District Court Judge Stephen V. Wilson who, in July 2016 determined that evidence of Caldera’s assertion was required as a prerequisite to approve the settlement.

In September, Caldera satisfied Judge Wilson’s request with the filing of an expert report revealing that Caldera’s debts and liabilities far exceeded its assets, and as such a liquidation of the company would result in a loss, not a gain.

More TRANSVAGINAL MESH News
The objectors were still not satisfied, asserting that documents filed by Caldera as to the expectations of liquidated value failed to adequately address, or prove that Caldera had no liquidated value. One objector asked to be excluded.

In the end, Judge Wilson indicated he was satisfied with assertions made by Caldera and Federal and refused to excuse the objectors from the settlement, which he duly approved.

The instant case is Federal Insurance Co. v. Caldera Medical Inc. et al., Case No. 2:15-cv-00393, in the US District Court for the Central District of California.

The state litigation is In Re. Transvaginal Mesh Litigation, Case No. JCCP 4733, in the Superior Court of the State of California for the County of Los Angeles.