British tabloids have sensationalised transvaginal mesh by describing one victim’s botched surgery a “biting vagina”; an Australian Senator compares the mesh to Thalidomide as one of Australia's worst health scandals; and in the US a transvaginal mesh class action lawsuit is settled for $12.3 million. 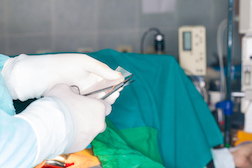 Sensationalized in the UK: The Biting Vagina
The “Biting Vagina” story first told by Theresa Bartram on her Facebook page has been sensationalized by the Daily Mail, reporting that she “was left with a Venus flytrap vagina that 'bit' her partner during sex after surgery for incontinence that went horribly wrong.” Bartram’s TVT led to serious problems including ‘ripping a chunk’ from her partner’s penis. Trust a British tabloid to pen this:

“It was like [my vagina] had grown teeth,' she recalled. His [penis] was bright red and spouting blood. There was a big red stain spreading between us on the sheets.' After that he was scared of my lady garden and approached it as if it was a Venus flytrap and he was a bluebottle.'”

Bartram is now campaigning for the procedure to be banned in England.

Scandal in Australia: Transvaginal Mesh Research Fraud
Australian Senator Derryn Hinch has called on a Senate inquiry and court action has been launched after he called transvaginal mesh “a national disgrace and one of the greatest medical scandals in Australia’s history”, according to the Sydney Morning Herald. Hinch told Federal Parliament that transvaginal mesh devices rivalled Thalidomide as one of Australia's worst health scandals.

This transvaginal mesh “global scandal” includes regulatory failure, allegations of research fraud and experimental surgery on women in multiple countries—stemming from the mesh devices developed in Australia from the 1980s and 1990s.

An investigation by the Newcastle Herald found that a transvaginal mesh device and procedure tested on 13 large dogs in Western Australia in 1987 was developed and registered in the US by a Tyco Healthcare subsidiary in 2001, trademarked by Covidien and called the IVS Tunneller.

Transvaginal mesh devices were then bought and modified by companies such as Johnson & Johnson and approved by the FDA “with little or no ‘good quality’ evidence to support their use to treat prolapse complications in women after child birth.” The Herald also reported that a second mesh device for incontinence, known as Tension-free Vaginal Tape or TVT, was developed after collaboration between Australian Dr. Peter Petros and the late Swedish Dr. Ulf Ulmsten, who also collaborated on the 1987 Western Australian dog tests that led Dr. Petros to develop the IVS Tunneller.

Dr. Petros said his "early experimental studies" had been "wrongly" used as "an intellectual cornerstone to justify the use of mesh in prolapse surgery". He declined to comment when contacted by the Herald. Australia’s health regulator, the TGA, cleared for use over 40 transvaginal mesh devices without any clinical trials—with the exception of the dogs. And despite warnings from the country’s specialists as far back as 2003, including gynaecologist Alan Hewson, who said that some surgical mesh procedures "cannot be recommended".

More TRANSVAGINAL MESH News
In a paper published 10 years later by another of the three specialists, Professor Christopher Maher criticized regulators, the medical profession, manufacturers and doctors who failed to disclose their ties with mesh manufacturers and for allowing "women we are trained to serve to be exposed to unknown risk,” reported the Herald. He predicted that global legal action could reach $20 billion and "be one of the largest ever class actions undertaken".

Settlement in the US
And in the US a transvaginal mesh class action resulted in a settlement against Caldera Medical. In early March a California federal judge approved the $12.3 million deal for more than 2,700 class members who claimed they were injured by the company’s next-gen Vertessa Lite device. The polypropylene mesh for treating pelvic organ prolapse was approved by the FDA’s 510(k) clearance in 2015, meaning it didn’t require clinical trials. (Perhaps it too was tested on large dogs.)

Posted by
Maija Leena Torikka
on April 23, 2017
I got mesh 2005 without doctor tell in me. Found out watching Dutch tv program Rada,after 7 years that I also have one.I was just told that I am too sensitive and all the pain is between my ears. We are living in 2017 and this is still going on. Can't we bind up all the countries and stop this.Or every doctor who does this gets also one.After all it all comes to money Money
Talks for the makers for the hospital's for the doctors,but they forgot the patiant