Christine Asprey’s life went from active and full to an emotional, physical and financial nightmare. All this after what was supposed to be a routine fix with Johnson & Johnson (J & J) transvaginal mesh to solve some minor issues with bladder control. 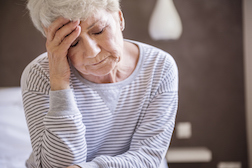 “We are moving along. We have settled some and hopefully we will get good resolutions to the others,” says Miller.

Meanwhile Asprey tries to cope. “The pain is so unreal,” says 52-year-old Asprey speaking to LawyersandSettlements.com in her first ever interview. “I don’t know how I made it this far.

“You can’t even describe the pain. It happens in the pelvic floor area. I can’t walk, I can’t grocery shop, I can’t clean. I just can’t do anything. I am going to pain management but the pain is suicidal.

“I just want this story out there,” says Asprey from her home in Winnipeg, Manitoba. “I want other women to know about this.”

In late 2011, Asprey was told she needed a hysterectomy. Asprey told the doctor that “sometimes she peed a bit when she laughed, or sneezed”. The doctor suggested that Asprey have Johnson & Johnson transvaginal mesh inserted to fix the problem.

“The bladder problems were not a big deal,” says Asprey. “I didn’t have to wear a diaper or anything like that, I was going to work and living a normal life.”

Asprey was working in hospital administration, scheduling staff in the ER and ICU departments. At lunchtime she went to the gym, in the evening she went to school at Red River College studying healthcare management.

Asprey had her surgery on January 10, 2012 and was expecting to be back at work in a few days. Three weeks after her surgery Asprey knew something was terribly wrong.

More TRANSVAGINAL MESH News
“I couldn’t work, I couldn’t sit, and I couldn’t do anything without pain. I just went downhill that summer. I just stopped walking. They put me on fentanyl (synthetic opioid similar to morphine but much stronger). I just about lost my mind. Pretty soon no one would talk to me,” says Asprey.

Her marriage broke down and her children could not understand what was happening to their normally active and engaged mother.

In the summer 2012 Asprey was desperate for relief. She went to Los Angeles to have an American surgeon remove the mesh.

“I had to go to Los Angeles to have a surgeon remove it,” says Asprey. Unfortunately, Asprey says, some of the mesh was embedded in the tissue and some was left behind.

“The mesh was exposed so every time I walked it cut me inside. It was all exposed and when that enters your body it shrinks and it hardens. Still today the pain is unreal. I have nerve damage and I have connective tissue damages,” says Asprey.