Four people are dead and dozens injured after one Metro transit train smashed into the back end of another in Washington, DC during the Monday evening rush hour commute. Included among the four dead in the train crash is the female operator of the second train. Her identity has not been made public. 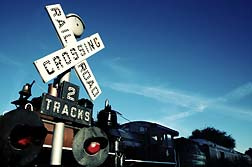 According to a report on NBC News, cars on the last train jackknifed into the air and fell on top of passenger cars on the rear-ended train. Rescue workers are on site cutting the trains apart to remove people who are trapped. The tracks are littered with debris from the wreck, such as seats from the trains that have been thrown clear of the passenger compartments.

According to an NBC News interview with Fire Chief Dennis Rubin, 70 people have so far been treated by rescue workers at the scene, and some have been sent to local hospitals, among them two people with life-threatening injuries.

More Train Crash News
The crash occurred around 5:00 p.m. EDT, on Metro's busiest line – the Red Line – which travels through tunnels for most of its course, but emerges above ground near the Maryland border.

As yet officials have no explanation for the crash, but at the moment do not believe terrorism is involved. Investigators from the National Transportation Safety Board are at the scene, and the FBI is helping with the evidence processing. So far, the FBI say there is no indication of any criminal activity in the crash.

This is only the second train crash in Metrorail's history in which there have been passenger fatalities. The first occasion was in January 1982, in which three people died following a derailment between the Smithsonian and the Federal Triangle Metro Stations underneath the downtown core.