India Train Crash Could Hold Lessons for US Rail Systems

It may have happened a half world away, but the train crash this week in Mumbai that killed more than 100 people and injured scores of others has terrorism experts a bit worried, warning that terrorists make note of methods and take lessons from all such attempts at train derailment regardless of location or success. The train wreck of May 28th proved that this attempt was successful for those taking responsibility. 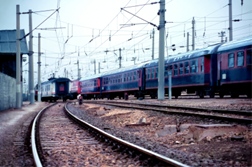 Investigators have determined that the rail line was sabotaged, leading to the derailment of the Calcutta-to-Mumbai express. The derailed train was hurled into the path of an oncoming freight train. According to the May 29th issue of Business Wire originating out of San Jose, a Maoist guerrilla group has claimed responsibility for the attack.

According to the Mineta Transportation Institute (MTI), an agency established and funded by Congress since 1991, this most recent train wreck points to a growing trend in India. But such activity could have serious implications for other countries, including the US.

Brian Michael Jenkins heads up MTI's National Transportation Security Center of Excellence and was in India this past September at the behest of Indian officials to discuss surface transportation safety issues. He will be going back for further work later this year.

"The threat seems to be growing, with at least 30 deliberate derailments in India since January 2000, almost four times the number of derailments in the 1990s, and 15 times the number of incidents in the 1980s," said Mr. Jenkins, in comments published by Business Wire. "The death toll between 2000 and 2010 is 13 times greater than that in the 1990s, although, owing to two bloody incidents, it is only slightly greater than the 1980s." MTI will be examining the train accident and other recent attacks in India to see what lessons might be learned and how these may be applied to other countries.

More TRAIN CRASH News
Such lessons can be extremely important. Jenkins notes that just as terrorists learn from their successes and mistakes to broaden their success and terrorist activities, so too must experts for transportation security and counter-terrorism experts in an effort to intensify the safety and security of systems at home.

Passengers who are injured, or the families of those killed in train derailments will not have the option of pursuing terrorist groups for damages. However, any domestic passenger rail service that fails to heed lessons learned from other disasters elsewhere in the world and implement reasonable security measures, could expect lawsuits in the event of a passenger rail disaster.

There is much fodder for consideration.

Brian Michael Jenkins is an international authority on terrorism and sophisticated crime.

The situation in India could have a negative impact on US business and commerce, given that many domestic companies rely on IT support based in India.

If you have suffered losses in this case, please send your complaint to a lawyer who will review your possible [Train Crash Lawsuit] at no cost or obligation.
Request Legal Help Now