More TRAIN CRASH News
City officials are blaming a Detroit firefighter for a train crash Monday morning occurred when a Chicago-bound Amtrak train collided with a fire truck that was parked on the railroad tracks. 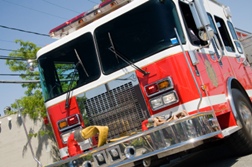 Firefighters and police had been attending to an earlier car crash involving a tractor trailer. A firefighter who noticed the oncoming train rushed into the cab to move the truck and was inside the vehicle when the train struck. He was treated for minor lacerations at a nearby hospital.

The train was carrying at least 76 people, but there were no serious injuries reported among the passengers or crew.

Executive Fire Commissioner James Mack told the local news that he was "very upset," and that the real victims were the citizens of Detroit.

"We're trained professionals. We should always be thinking," he told Fox 2. "I think about the disservice we do to the citizens when I got a fire truck out of service. This is their fire truck. They paid for it, and it should be in service and it should be cared for."