Was Darkness, or Distraction the Cause of Disney World Monorail Crash?

Disney World is a land of fantasy and magic, so it becomes even more devastating when an accident happens at the vaulted theme park. And it happened in the wee hours of this morning, when a moving monorail train collided with the back of a stationary train, killing the driver and injuring another in a train crash. 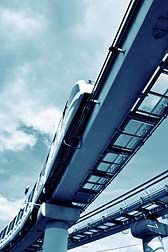 According to an account in the Orlando Sentinel this morning, the accident took place at about 2am Sunday, July 5th during one of the last runs of the monorail system for the day. According to the Sentinel the trains were transporting guests leaving the Epcot Center. The CF News 13 web site quoted eyewitnesses as saying the trains collided on the Epcot track at the main Transportation and Ticket Center, which is located at the parking lot of Magic Kingdom.

Guests were reportedly leaving the park following a Fourth of July fireworks show.

According to the Sentinel, one other monorail driver was injured. The driver who was killed, who was not identified, is reported to have died at the scene by the Reedy Creek Fire Department, in a statement to CF News 13. The second driver was taken to hospital, but the Sentinel reported that those injuries were not serious.

Officials with the Reedy Creek Fire Department told CF News 13 that five guests were on the monorail at the time of the collision. However, they also confirmed that none of the guests on the train were injured.

In a statement Griffin, who serves as Vice President of Public Affairs for Disney World, said: "Today, we mourn the loss of our fellow cast member. Our hearts go out to his family and to those who have lost a friend and co-worker. The safety of our guests and cast members is always our top priority. The monorail is out of service and we will continue to work closely with law enforcement to determine what happened and the approximate next steps."

It was unclear if Disney World refers to their staff collectively as 'cast members,' or if someone who should not have been piloting the train was indeed at the controls.

Rescuers had to cut the deceased driver from the wreckage.

Epcot was scheduled to be open this morning as scheduled, although the Epcot leg of the monorail was expected to remain out of service pending further investigation of the train crash that happened at the end of what would have been the highlight of the July 4th celebration. Disney World, among other attractions is known for its displays of fireworks.

The Orlando Sentinel quoted a report from CFNews13.com that the monorail train crash was the first fatal accident in the line's history. The monorail, a futuristic transit system that is one of Epcot's calling cards, was opened nearly 38 years ago.

According to News 13 the Disney World monorail system is designed to allow no fewer than two hold points between a given train and the train ahead of it. According to Disney officials in the News 13 account, when a train detects there are fewer than two hold points between itself and a preceding train, emergency brakes are immediately applied and cannot be released until sufficient spacing becomes available.

However, the operator has the power to explicitly override the system.

More Train Crash News
While this has been the first fatal accident in the monorail's proud 38-year history at the theme park, it is not the first accident. In 1996 an electrical fire broke out in a train pulling into the Magic Kingdom station. The driver and five passengers exited safely.

A far more serious fire happened on June 26th 1985, when fire engulfed the rear car of a monorail train en route from Epcot to the Transportation and Ticket Center at Magic Kingdom. The 40 passengers in the burning car kicked out side windows to escape the flames and made for the roof of the now-stopped train, where they were rescued by fire officials. According to the summary carried by 13 News seven passengers were hospitalized for smoke inhalation or other minor injuries.

In 1974, an accident similar to that which happened early this morning occurred when a monorail train crashed into the train ahead of it, injuring a driver and two guests.