As rescue workers and fire crews struggle to dismantle the wreckage from what is being called the worst train crash in DC's history, the official number of fatalities continues to climb, with nine people now confirmed dead. More than 70 people have been hospitalized with injuries. 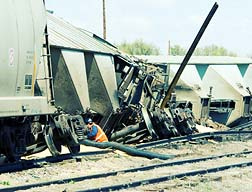 Making matters worse came the startling revelation earlier today that the older of the two Metrorail trains involved in the collision should have been replaced but was kept in service despite safety warnings issued in 2006.

According to reports on MSNBC, Debbie Hersman of the National Transportation Safety Board (NTSB) said that they had warned Metrorail of safety issues with the older trains, and recommended retrofitting them to withstand crash impacts, or taking them out of service all together. Neither was done, which she said the NTSB considered "unacceptable".

While the cause of the train crash has not yet been determined, crews are expected to recover the data recorders from the newer train, which should shed some insight onto the chain of events that led to the crash. Unfortunately, the older train which caused the collision is part of an aging fleet of trains that do not have data recorders.
However, Metrorail does have a computerized system on most trains, which is in operation during rush hour, which is when the crash occurred, at around 5:00 p.m. eastern daylight time, Monday, June 22 on Metro's busiest line–the Red Line–on a rare above-ground stretch of track.

More Train Crash News
The computerized system is meant to prevent collisions by controlling braking and traveling speeds. However, the system has failed before, resulting in a near disaster under the Potomac River in June 2005, when one train got too close to the train ahead of it. An incident was avoided because the operators of two trains used their emergency brakes.

Identities of the Deceased
The identities of the deceased from yesterday's crash were released earlier today, and are Mary Doolittle, 59, of northwest Washington; Ana Fernandez, 40, of Hyattsville, MD.; Dennis Hawkins, 64, of southeast Washington and Lavonda King, 23, of northeast D.C. The operator of the train that was moving, who also died, has been identified as Jeanice McMillan, 42, of Springfield, VA. According to NBC News reports, the former commander of the District of Columbia National Guard, Maj. Gen. David F. Wherley, Jr is also among the nine fatalities. Officials are trying to determine if Wherley's wife was also killed in the accident. Both were 62 years-old.