The death toll in what has been described as the worst commuter train crash in the history of Washington, DC was pegged at seven this morning, after officials raised it to nine overnight with the discovery of more bodies, according to this morning's edition of the New York Times.

The death toll was revised to seven just minutes ago. 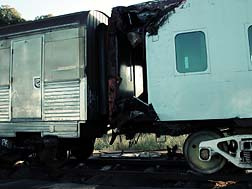 Initially, it was believed that four people had died when one commuter train on the Red Line slammed into another at the beginning of rush hour Monday. However, as investigators and rescuers combed through the carnage the death toll kept climbing.

At least 76 people were injured.

The accident happened June 22nd at about 5pm eastern daylight time. One Metro train was idled near a platform, waiting for permission to proceed when it was hit from behind by a second train.

Eyewitnesses said that one car from the second train was sitting atop a car from the first train, according to the report in the New York Times. The floor of the car on top had been sheered off and seats from the pulverized cars were seen strewn on the tracks.

One passenger riding in the second train that collided with the first reported looking out a window and seeing a body lying on the tracks. Maya Maroto, 31, of Burtonsville Maryland was riding in the third car of the moving train and described the crash as, "a huge impact." She looked out the door and saw the front of her train wedged on top of the other one.

The crash is reported to have occurred at about 5pm on the heavily travelled Metro Red Line route between Tacoma and Fort Totten. Those two stations bookend a long stretch of track. The suggestion was made in the Times article that given the long, uninterrupted stretch of track it is possible that trains could reach high speeds.

There is no indication as to what might have caused the horrific accident. Investigators from the National Transportation Safety Board (NTSB) were on the scene and expressed their intention to review all safety recommendations the NTSB had made previously to the transit system.

The Metrorail system was opened in 1976. "This is an aging system and one that needs to be looked at very closely," said Peter Goelz, former managing director of the National Transportation Safety Board, in comments published in the New York Times. While the NTSB was going to focus on why the accident happened, the search and rescue of passengers would take precedent until all riders were accounted for.

Among the seven people dead is the operator of the train, who was identified by the Office of the Mayor as Jeanice McMillan, 42.

Last year, an equally horrific commuter train crash in California was caused when a train operator missed seeing safety warnings along the route because he was allegedly texting on his cell phone.

"Michelle and I were saddened by the terrible accident in Northeast Washington, DC, today," said President Obama, in a statement released yesterday. "Our thoughts and prayers go out to the families and friends affected by this tragedy. I want to thank the brave first responders who arrived immediately to save lives."

Mayor Adrian Fenty was quoted as saying "it looks to be the worst Metro accident in DC history. We're going to investigate this and find out what happened."

The general manager of the line, John Catoe, did not speculate in the New York Times report as to what might have caused the collision, or what safety mechanisms designed to prevent such crashes might have failed.

Much of the Metro Red Line runs underground. However, the train crash yesterday occurred above ground.

Aside from the seven people pronounced dead at the scene, CNN was reporting a total of 76 people treated for injuries at the scene, including two with life-threatening injuries. According to the chief of the Fire and Emergency Medical Services Department for the District of Columbia, Dennis Rubin, two of the injured were emergency responders.

Adrian Fenty, the mayor for the District of Columbia, told CNN's Larry King Monday night that one car was about 75 percent compressed. Later, in a news conference CNN reports Fenty as saying, "the scene is as horrific as you can imagine. One car was almost squeezed completely together."

A certified nursing assistant who was on one of the trains told CNN affiliate WUSA she was trying to help those in severe condition after the crash, including a lady who appeared to be in her 20s.

"She is very, very torn in her legs—the muscles and everything are torn, ripped through. She had metal pieces in her face," said the nursing assistant, who said her name was Jeanie.

Other witnesses described to CNN as seeing more blood than they had ever seen before.

More Train Crash News
Peter Golez, the former NTSB managing director, told CNN that the investigators "are going to look very carefully at the event recorder in the train that hit the stopped train," he said. "Unfortunately, in a number of train accidents recently, both in Boston and in Southern California, you had the engineer being distracted. My hope is that's not the case here."

The operators of those two trains were found to have been sending text messages just before the accidents. Since then, the California Public Utilities Commission has banned train engineers from using cell phones on duty.

CNN reported that the Washington transit authority told investigators that trains normally operate in automatic mode at rush hour. A spokesperson said that investigators were trying to determine whether that was true during the accident, or if the trains were being operated manually at the time.