The government of Japan has asked Toyota to test the brakes of its popular Prius hybrid for possible failure. The announcement could not be more badly timed for Toyota, arriving as the automaker attempts to rebuild public confidence on the heels of several massive recalls. 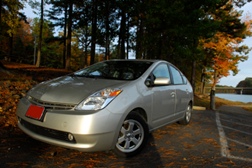 The Prius is fitted with a complex braking system that transfers energy from the wheels to recharge of the car's batteries. As new hybrid models and electric cars make their way onto the road, the regenerative braking system of the Prius continues to be a hallmark of the brand.

Prius drivers in Japan, according to a report published this morning in the New York Times, have complained that their brakes briefly stop working when going at low speeds and on slippery surfaces. In July 2009 a late-model Prius in Japan collided with another vehicle at an intersection, hurting two people. The brakes had failed.

A Toyota spokesman in Japan was quoted as saying that dealers in Japan as well as in North America have received "several tens" of reports from customers claiming that their cars have "braked insufficiently" on bumpy or frozen roads.

Ten of 14 complaints issued about the Prius in Japan came just last month. Consumers were complaining about the new Prius, which is also sold in North America and will begin selling in the US in May.

Ririko Takeuchi, a spokeswoman for Toyota, said it was unclear whether there was a defect with the regenerative brakes, although Toyota could not rule such a problem out. The latest model of the Prius was outfitted with an updated regenerative braking system that wasn't used in older models. Takeuchi said that Toyota was not aware of any problems with the older braking system.

Toyota is said to be looking into the problem. Takeuchi said the automaker is not in a position to release additional details and did not know if a recall would be necessary.

The Prius has been a bright spot in the Toyota show, popular with eco-friendly drivers and environmentalists willing to pay bigger dollars for a car at the leading edge of hybrid technology. A plug-in version of the Prius is due to be released in 2011 and 2012.

A Prius recall would prove to be yet another significant setback for the company, as it fights to maintain market share and customer loyalty in the wake of several recalls involving of millions of vehicles with defective accelerator pedals.

Click to learn more about LawyersandSettlements.com
LawyersandSettlements.com - A trusted, independent legal news provider bringing quality news and information on legal cases and lawsuits filed in the United States of America to its readers since 2002. Over 650,000 legal help requests including Automotive accidents, Defective Product Cases, and Personal Injury Cases have been forwarded to lawyers all across to the country.