Jill Mclean (not her real name) bought a few Totino's frozen pizzas mainly because she was on a budget. Turns out, a few slices of Totino's Party Supreme cost her more than she bargained for—and then some. Mclean didn't know about the E. coli pizza recall until it was too late.

On October 28th, Mclean was so sick she went to ER. "I was throwing up, had diarrhea and severe pain in my stomach,'" she says. "I also had a high fever and was really dehydrated so they ran the usual tests and a CAT Scan. I haven't got the blood tests back yet, but the doctor told me that I have a gastro-intestinal infection. I've never been diagnosed with food poisoning; I never had that a pain that severe in my stomach. They were really sharp and that is why I went to ER. If it wasn't for those pains I would have just thought it was a virus. 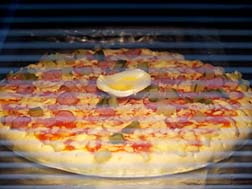 I was prescribed Cipro [an antibiotic effective against a broad range of bacteria]
along with pain killers that put me in la-la land. He also told me that I most likely ate something with E coli.

"I couldn't imagine what I could have eaten to give me E coli. I went back to work a few days later (although it took almost a week to feel back to normal) and one of my co-workers asked me if I had eaten any frozen pizza lately. 'Yes, I had a slice of Totino's supreme pizza and one with pepperoni,' I replied. That's when I found out about the recall. I had not idea but it didn't take long to put two and two—or I should say, slice and slice—together.

It isn't the first time I bought this brand of pizza—it is pretty cheap and not that great, but I was broke. But it isn't cheap in the long run---I missed work and have medical bills now. I feel a bit squeamish about eating another pizza and will definitely not buy this brand ever again.

What's worse is that there are so many recalls and they seem to be increasing, it scares me to eat anything! It doesn't necessarily apply to prepared foods because E coli have also been found in meat and even lettuce.

I don't have any physical evidence but it is common sense that I got sick from eating this pizza. The guy who gave me the refund just gave me back the money and he circled my receipt, initialed it and dated it. I'm holding on to that receipt—that is the only piece of evidence I have so far, unless my blood tests show E coli. I will bet on that.

I think people who work in food production don't pay attention. You hear about how to prepare your meat and make sure not to contaminate anything. There are times when I have slacked on my job but it doesn't put people's lives at risk. It's human nature to slack off but when you have a job working with food and you have the potential to harm lives, please be more careful with your fellow citizens."