Deadly Frozen Pizza in Your Freezer?

The box may say it's crisp 'n tasty, but the potential for an unseen ingredient in your Jeno's or Totino's frozen pizza could put you in the hospital with E. coli, and has resulted in a massive frozen pizza recall.

It is, in fact one of the largest recalls that General Mills has seen in years. On November 1st, the huge manufacturer voluntarily called back five million frozen pizzas last Thursday afternoon from store shelves nationwide.

However, as large as that frozen pizza recall is, it could pale in comparison to the number of frozen pizzas now languishing in consumer freezers around the nation. A spokesperson for General Mills said of the November 1st recall, that it is virtually impossible to determine how many frozen pizzas are out there. 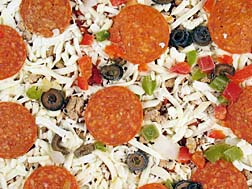 Indeed, General Mills has sold a staggering 120 million pizzas since July 1st, 60 percent of which are topped with pepperoni, the offending ingredient that is considered the source of the E. coli contamination

The recall was initiated after 21 people in 10 states fell ill with E. coli between mid-July and mid October of this year. Eight were hospitalized, and four developed kidney failure.

General Mills manufactured the Totino's and Jeno's frozen pizzas in a plant located at Wellston, Ohio. The company, however, does not make the pepperoni, which health officials assume must have been undercooked and processed incorrectly before inclusion with the remaining ingredients atop the recalled frozen pizzas. A spokesperson for General Mills, which was alerted to the findings the day before Halloween, declined to identify the supplier of the tainted pepperoni.

Each package of potentially contaminated pizza bears the establishment number "EST. 7750" inside the USDA mark of inspection as well as a "best if used by" date on or before "02 APR 08 WS. Complete lot numbers of pizza manufactured on, or before October 30th can be found at this [link].

The potential size and scope of this recall takes on massive proportions when one considers the popularity of frozen pizzas as a source for quick dinners for busy families, and the numbers that are out there.

Doing the math, a recall of five million pizzas from store shelves, leaves the potential for 115 million pizzas still in circulation. Sixty per cent of those contained pepperoni, which equates to 69,000,000 Totino's and Jeno's frozen pepperoni pizzas sitting in freezers, tainted with the potentially deadly E. coli O157:H7 bacterium, waiting to pounce on an unsuspecting family.

The potential for disaster surrounding this frozen pizza recall is enormous.

With a best-used date of April 2, 2008 it can be assumed that consumers and health officials will be on pins and needles until then—and that's assuming that consumers will respect the best-before date. Some, having purchased Totino's and Jeno's Pizza in quantity, may disregard the warning.

Health officials make the point that E. coli O157:H7 is mostly associated with ground beef, and on the surface it may seem odd to find E. coli in meat such as pepperoni. That said, meat is meat, and as E. coli originates in the intestines of animals, it is not beyond the realm of possibility that pepperoni product that was not processed correctly could just as easily be contaminated.

A spokesperson for General Mills assures there is no E. coli contamination in its plant.

An investigation led by the Tennessee Department of Health found 21 people in ten States fell ill with E. coli over a three-month period starting in mid-July. The findings were turned over to the Centers for Disease Control and Prevention (CDCP) in Atlanta, for further analysis.

While only nine of the 21 stricken with E. coli reported eating a Totino's or Jeno's recalled frozen pizza product, the CDCP noted that the genetic fingerprint of the O157:H7 E. coli strain was consistent amongst all those stricken, therefore it is reasonable to conclude that consuming a recalled Totino's or Jeno's frozen pepperoni pizza was "significantly associated with illness," the CDCP concluded in a statement.

More News
The agency suggested further that more than half of those stricken could not recall specifically if they had eaten a Totino's or Jeno's frozen pizza before falling ill, however certain findings consistent with all 21 stricken with E. coli suggest that the remainder may have consumed the tainted pizza, but simply couldn't remember.

E. coli can cause severe abdominal cramps and bloody diarrhea that lasts for a few days on average. However, risk for more severe symptoms increases in children, the elderly, and those with weakened immune systems. Severe dehydration, and kidney complications can lead to hospitalization, and in some cases E. coli can prove fatal.

Given the popularity of frozen pizza with young families, the true implications of this recall have yet to be felt.

In the words of General Mills spokesman Tom Forsythe, "There is absolutely no way to quantify how much pizza is in the freezer."