Robert J. bought a box of Topps burgers and wound up in the hospital—on three separate occasions! "I assume that if the doctors don't know what to look for, they don't find it," says Robert. If he knew about the Topps beef recall, Robert could have saved himself two trips to the hospital and a whole lot money in medical bills. But now he knows about the Topps [lawsuit].

About one day after he barbecued the burgers, Robert J. got really sick. "I'm not the kind of person who runs to the doctor for every little thing but the pain was excruciating," explains Robert. "All three times I went to the hospital they put me on IV because I was so dehydrated and they wanted to keep me in overnight, thinking it might have been my appendix, but I didn't want to go that route. 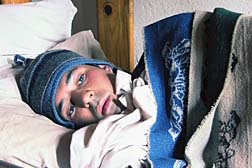 "Obviously there was no stool sample taken (because of my condition). They took Cat Scans, x-rays, blood and urine, the whole gamut. Still they didn't find the cause. They asked what I ate in the last few days, was I stressed. They never said it could be bacteria from food."

Each time he was prescribed antibiotics and went home—and ate another burger. Why was Robert the only one in his family to get sick? It might have been because his family likes their meat 'well done'. "Most of the time I eat meat medium-rare and I cooked mine not as well done as the others," Robert says. "But it wasn't pink inside—I cooked it thoroughly."

Finally, the gastroenterologist who did the colonoscopy found three different areas of bacteria and concluded it was an unknown cause—possibly due to all the antibiotics he had taken.

More News
All totaled, Robert was sick for about six weeks. Then a relative called and asked if he had eaten any Topps burgers because she heard about the recall and knew of his symptoms. "Sure enough, I looked at the box and it was on the recall list," says Robert, "and I still had six burgers left in the box."

Robert called his gastroenterologist and asked if it could have been E. coli from the burgers. His reply: Yes.

"I was relieved to know the reason for my illness but at the same time angry that I would be put in this situation, for the fact that this company was careless," he says. " I don't have insurance; I have to pay all my medical bills and they are still coming in.
One bill was $4,480 and that was for just one hospital visit, including the CAT scans and x rays.

I want to see my medical bills paid and I lost a lot of time off work—I think that Topps should cover these expenses-- at a bare minimum."