Two days after a class action lawsuit was filed against them, Topps Meat Company announced that it was going out of business, brought to its knees by the tainted meat recall. The company, based in New Jersey, found itself at the centre of controversy after an initially small recall of beef products suspected of being tainted with E. coli mushroomed into a huge claw back of meat.

Initially, about 300,000 pounds of beef and beef products distributed by Topps was recalled - however, that number soon mushroomed to 21.7 million pounds of ground beef, one of the largest meat recalls in recent memory.

The company manufactured frozen hamburgers and other meat products for supermarkets and mass merchandisers.

The Topps world fell in, within a month. 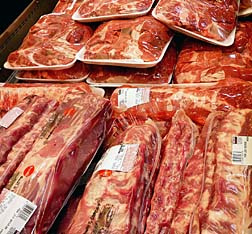 It was on September 8th that Topps was notified by health officials that its product was suspected of E. coli after a consumer fell ill, in Florida.

However, reports go back even earlier, to the summer months. In early July, an 18-year-old girl from central Pennsylvania fell ill after eating meat that, after the fact, is considered one of the first reports of Topps meat products linked with the O157:H7 strain of E. coli, one of the most virulent strains of the disease. Three days later some tainted beef showed up in New Jersey, with additional reports stemming from Florida, Maine, Ohio, Indiana, New York and Connecticut.

Included in the list of consumers felled by tainted Topps beef are four children, two of whom developed haemolytic uremic syndrome, affecting the kidneys, and were hospitalized.

After waiting 18 days for more conclusive testing to come in, the initial recall of 331,582 pounds worth of Topps frozen patties was issued on September 25th - however four days later that recall had ballooned to 21.7 million pounds.

The first lawsuit quickly followed, filed by Robert and Catherine McDonald of Colonie, New York. Their eight-year-old daughter became ill after eating a hamburger fashioned from Topps ground beef on August 17th. The little girl developed a fever and diarrhea, and tests concluded E.coli. The child was hospitalized for three days.

Not long after, a class action was filed against the company and a number of retailers. The lawsuit was filed in United States District Court in New York and names Topps, together with Wal-Mart, ShopRite and Pathmark, among other defendants.

There are four plaintiffs named in the class action, one of whom is Jimmy Patton of Springdale, Ark., who purchased Sam's Choice Backyard Gourmet Beef Burgers on September 15 from Wal-Mart. According to filed documents, seven days later he cooked and ate the beef and by September 26th Patton began showing signs of E. coli exposure, including severe abdominal cramps, severe bloody diarrhea and fatigue.

Topps, which has been manufacturing and marketing beef products for 67 years, issued no comment to the lawsuit at the time. However, it responded two days later by informing its employees that the company could not survive the recall, and was going out of business.

The announcement came at the end of a staff barbecue, at which Topps meat products were served. There's no report so far of anyone becoming sick at that event.

Topps is owned by Strategic Investment and Holdings, located in Buffalo, New York.
In 2005 Topps had to settle a $1.7 million dollar claim after a maintenance worker lost his arm in an industrial accident, and the family of a 9 year-old girl sued the company after their daughter became sick from eating Topps product.

More News
Turns out, 2005 was a bad year for Topps. The Agriculture Department notified Topps at the time, that it had been advised the company had received ten bins of meat, thought to be tainted with E. coli. However Topps had already started to process the meat, before the report was received.

There is related concern about a practice by the company of carrying forward meat production from one day to the next, without giving each days' production separate batch numbers. The practice is not illegal, nor is it considered unsafe, and the manufacturer was not breaking any rules or breaching any protocol, in operating this way.

However, with respect to E. coli contamination, it is much harder to track when various day's production of meat, is mixed together. An official from the U.S. Agriculture Department confirmed that Topps did, indeed, carry forward meat in this way.

Topps is the first meat products producer to succumb, and cease operations, to a recall.