Vincent Torres bought a package of quarter-pounder Topps beef burgers and broiled three of them that night—he had a healthy appetite. But it's going to be a long time before he'll eat another burger after becoming violently ill from E coli, just one week before reading about the Topps beef recall.

"Anyone who knows me says I cook burgers well-done," says Torres. "I don't eat anything raw, even sushi; I don't think my constitution could handle that." Obviously, Torres knows the danger of eating undercooked meat.

"I ate the burgers around 8pm and went to bed a few hours later," he says. "At 6am I woke up with a fever, diarrhea, vomiting and spots of blood in my stool. I've had fevers before but not of this magnitude- my temperature was 104F. I stayed at home for two days, trying to get over it.

I went to my doctor when I was finally able to get on my feet and he prescribed five days worth of Ciprofloxacin for diarrhea and intense stomach cramping. When I described my symptoms, he thought I might have food poisoning. I also suspected food poisoning but didn't know about the recall until one week later--when I read the newspaper. 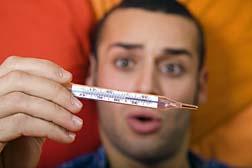 I took the meds and felt better about 4 days later. After the fifth day, I started to get flu-like symptoms again, same as before. I went back to my doctor and this time he prescribed antibiotics for E coli.

Then I saw the recall. Now I was sure it was due to the Topps hamburger products (I only ate the burgers that one time). I looked in my fridge, and the serial numbers of the recall numbers and the numbers on my box matched. 'Ohmigod,' I said to my girlfriend, 'I have eaten E coli tainted burgers.'

I was shocked that they would sell a quality-product and I would get sick from it. I was a long-time customer of Topps and always bought these burgers—they tasted good and the price was reasonable (15 burgers for $13.99)

More News
I went back to the supermarket where I purchased them to get a refund and all their Topps products, any evidence of them selling Topps products, were removed from the shelves. I asked to speak with the manager concerning the recall. I was told to come back, the manager wasn't there. I felt that they were avoiding me. They told me that I would have to contact Topps directly.

I never called Topps because I investigated my situation further, saw your website and decided to get involved in a class action lawsuit. My recurring fever and symptoms made me lose several days of work, not to mention how terrible I felt. At one point I was delirious. I was very disappointed that their product would make me this ill.

I really appreciate the awareness that you are bringing to people regarding this situation—fighting for the little guy. I hope nobody else has to suffer like this. The FDA should be harsher on these companies and have tighter controls; there should be stricter safety regulations. There was no need for so many people to get so ill."