Lawsuits have been filed against Topps Meat Company in the wake of a [recall] due to the discovery of E. coli in some of the company's products. At least two lawsuits have been filed so far, although more are likely to follow. The contamination resulted in the hospitalization of adults and children who contracted E. coli after eating some Topps products.

The first lawsuit was filed by a family in Florida who say their 15-year-old daughter spent almost a month in the hospital after eating contaminated hamburgers. According to the lawsuit, the girl required dialysis as part of her treatment because she suffered kidney failure from eating contaminated meat. The family has also named Wal-Mart as a defendant in the lawsuit. 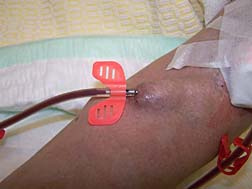 The parents of a girl who developed E. coli after eating tainted Topps Meat Company beef patties filed the second lawsuit in New York. The parents initially thought the eight-year-old girl had a stomach virus. However, after her symptoms got worse, including stomach cramps, fever, chills, and diarrhea, the girl was taken to the hospital where tests showed that she had the same strain of E. coli found in Topps Meat beef patties. The girl spent four days recovering in the hospital.

The plaintiffs say they want Topps to be held accountable for allowing E. coli contaminated foods to be sold on the market. They are also seeking to recover the cost of their daughter's medical bills. The family is represented by attorney William Marler of the law firm Marler Clark.

On October 1, the recall of Topps frozen hamburger patties was expanded after federal inspectors found inadequate safety measures at the company's plant. Over 22 million pounds of Topps ground beef products have been taken off store shelves. According to an article in [Newsday], USDA officials found that Topps used meat from one day's operations and mixed it with the next day's batch. Although the practice is not illegal, it requires vigilance on the part of the processor to prevent any contamination.

More News
There have already been dozens of reports of E. coli occurring in Connecticut, Florida, Indiana, New Jersey, Pennsylvania, New York, Ohio and Maine. Symptoms of E. coli include diarrhea and severe cramps. Children and elderly people tend to have more severe symptoms of E. coli and require longer recovery times. In some cases, especially in people with weakened immune systems, E. coli poisoning can be deadly.

Anyone with Topps frozen hamburger products in their freezers should check the product for a USDA establishment code of "9-7-4-8," which is the code on the recalled products. The recalled beef also has a "sell by date" or "best if used by date" between September 25, 2007 and September 25, 2008. Products were sold under a variety of brand names, including Topps, Sam's Choice and Shoprite.