Topps Tainted Beef Recall: Could it be the Tip of the Iceberg?

In the wake of a massive Topps tainted hamburger recall earlier this fall, there is some speculation amongst industry watchdogs that there could be a more widespread problem looming, with the prevalence of E. coli contamination on the rise. And [lawsuits] are on the rise.

Among the concerns is the increased use of offshore sources of raw meat, health inspectors that are not properly trained and lack due diligence in citing meat plants for infractions, and an industry that largely regulates itself. To that end, federal guidelines enacted in 2002 allowed the meat processing industry to set its own policies and practices, which are supposed to be maintained by the company itself and policed by federal health regulators. 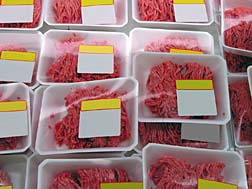 And yet, the huge 21.7 million pound recall by Topps-- the second-largest beef recall in U.S. history and effectively putting the company out of business--was only one of 16 meat recalls in the United States this year, according to findings published this morning in the New York Times.

In fact, in tracking the E. coli pathogen, its presence has increased sharply this year over last year and 2005.

It would be unfair to paint the entire meat industry with the same brush. Most of the larger plants have strict guidelines in place that are stringently enforced, not to mention the availability of new, more accurate methods of testing for E. coli that have been adopted by the larger players. A spokesperson for the American Meat Institute Foundation maintains that the industry as a whole has been working diligently to mitigate the presence of E. coli and reduce the number of recalls. Needless to say, the Topps situation concerns them.

However, while the industry struggles to minimize contamination, there is also a greater emphasis on the use of cheaper, imported meat from foreign countries.

Much of that meat is not required to be tested.

For its part, the US Department of Agriculture, the authority responsible for the checks and balances in the meat industry, initiated a nation-wide survey October 12th of E. coli prevention practices and protocols in the meat industry. Inspectors are expected to dig hard and deep, to acquire a realistic snapshot of just what the industry is doing to police itself.

The Topps story is an example of what can go wrong. Reports have surfaced that tested and untested meat was mixed together. Microbial testing of finished beef was cut back from once per month, to three times per year. Compare that to some of the larger plants that test beef once per hour.

There were numerous citations at Topps by the Agriculture Department for lack of cleanliness in the Elizabeth plant over a two-year period starting in 2005. More recently, three different lots of hamburger were found to be contaminated, but the company's record keeping was so lax that federal investigators could not determine if other lots were free from contamination.

In addition to tested meat from suppliers that was mixed in with untested meat, officials found that untested boxes of meat from the freezer were also tossed in, as were untested beef trimmings from the plant's steak line.

The 21.7 million pounds recalled represented a full year's worth of production. However, with poor records and the cross-pollination of batches in the meat grinders, regulators had to be sure.

The recall closed the plant, now out of business after 67 years. It was founded in 1940 and run by the Sachs family until it was sold to a diversified private equity firm in 2003. The new owners, according to information published today in the New York Times, invested heavily in the plant, installed new machines, brought in outside managers and ramped up production.

There was also a change to include more beef from offshore countries, including places like Uruguay.

During the three days when Topps was known to have produced E. coli-contaminated beef last summer, prior to the recall, the company was grinding both domestic and foreign beef.

The U.S. Agriculture Department has not ruled out mandatory testing, and mandated procedures for the domestic industry, either. Much will come from the findings of the current survey, now being conducted.

More News
At the end of the day, the feds need to consider whether or not it is wise to allow the industry to, for the most part, police itself. Some say there's too much of a cozy relationship between the Agriculture Department and the meat industry. Representative Rosa L. DeLauro, Democrat of Connecticut, said in the New York Times this morning that the Agriculture Department's approach to enforcement was haphazard, adding that the department makes recommendations that are "summarily ignored."

The most damning bit of information coming out of the Topps recall debacle, is that federal inspectors were in the Topps plant for one to two hours daily.

All this went on, right under their noses. And on their watch, E. coli sickened at least 40 people.

Escherichia coli is normally harmless. But the strain E. coli 0157:H7 produces a lethal toxin that can cause severe diarrhea, kidney failure and even death in the very young, in seniors, or in people with weakened immune systems.