A franchisee with several retail establishments under three banners and who apparently prides himself on having happy employees has been hit with a Texas Employment lawsuit alleging unpaid overtime and unpaid work through tasks that were allegedly performed off the clock. 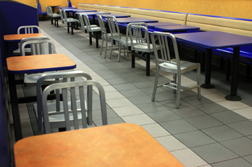 The allegations, if proven, circumvent provisions entrenched in both Texas Labor Law and the Fair Labor Standards Act (FLSA), a federal statute.

The lawsuit, not dissimilar to other Texas lawsuits alleging nonpayment of wages, was launched by five former employees of Wessam “Sammie” Aldeeb, identified by the San Antonio Express-News (2/12/14) as a principal of franchise operations that feature at least eight locations in San Antonio and Boerne. The banners over the door include Subway, Great American Cookies and Marble Slab Creamery.

According to Brenda Pacheco, one of the named plaintiffs in the Texas labor and employment lawsuit, she claims to have worked “many overtime hours, time that I was away from my family, and I believe I was not paid properly for that time.” Pacheco, according to court documents, was employed at both Marble Slab Creamery and Great American Cookies, franchises operated by Aldeeb.

The franchisers say the matter is confined to the franchisee, Aldeeb. As for Aldeeb, he was not aware of the Texas lawsuit until contacted by a reporter with the Express-News (a fact acknowledged by the legal representatives for the plaintiffs). He also claims the allegations are unfounded.

“This obviously never happened. We would never do this,” Aldeeb said, in comments published in the Express-News. “My success in this industry only happens through the hard work of my employees and keeping them happy.

The lawsuit was filed in early February in San Antonio and seeks status as a class action on behalf of an estimated 125 food service workers currently or formerly employed by various defendants, according to the report.

Meanwhile, a Burger King outlet in Bellaire played host to about 30 protestors on April 3 advocating for a raise in the minimum wage. According to The Houston Chronicle (4/4/14), “Fight for $15 Texas” is planning further action, including the potential for a Texas lawsuit to recoup wages, if no movement is forthcoming on the minimum wage issue.

The so-called “Fight for 15” movement is gaining popularity and notoriety, with the group having already filed wage and hour lawsuits in three states with McDonald’s serving as the target. The lawsuits allege that McDonald’s and several franchise owners require their workers to toil off the clock, failed to pay overtime, and altered employee time cards to reflect fewer hours, or so it is alleged.

More TEXAS EMPLOYMENT LAW News
The Service Employees International Union (SEIU) is said to be involved in the lawsuits in California, New York and Michigan, as well as the protest involving issues of Texas labor and employment law at the fast food outlet in Bellaire. Proponents of the protest, many of them fast food workers who make far less than $15 per hour, are fighting for the increase given the platform and belief that anything less than that amount cannot be considered a living wage.

However beyond that, said the Reverend Ronnie Lister, identified in The Chronicle report as the religious liaison for Mi Familia Vota, a social justice group and a subsidiary of SEIU, are allegations of wage theft through working off the clock, time card alterations and non-payment of overtime.

“Wage theft should be treated the same as stealing a car, stealing a bicycle or stealing a candy bar from the store,” he said at the protest against current Texas labor and employment practices at Bellaire.