"Arrow Trucking didn't tell anyone, not even the managers, that they were closing shop," says former employee Santiago. "One morning I was working in customer service, and later that same day I was unemployed; they have totally disregarded Texas employment law." 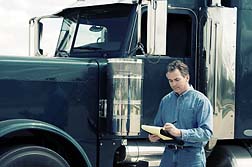 Attorneys who represent about 1,400 former Arrow Trucking employees have filed a lawsuit against the company owners, alleging that the employees were not given proper notice. The Worker Adjustment and Retraining Notification Act (WARN) Act calls for 60 days notice, but according to Santiago, employees received no notice. Many truck drivers were even worse off than him: they were left stranded with no money to get home.

"If you call Arrow right now, there is a recording that says, 'Bring your truck to the nearest freightliner dealer and they will give you $200 to get home.' I know that some drivers have done that but others have just abandoned their trucks," says Santiago.

"For instance, if a driver lives in Seattle and drove to Laredo with a load, he was stranded. Not only did he have to find his own way home, the load wasn't delivered. Imagine you are delivering something and they cut off your car—you can't even move a block away. So all these shipments are all over country, never even delivered.

"About 16 mechanics and office personnel here in Laredo and many other people who worked at the terminals in Houston, Dallas, Phoenix and Tulsa are in the same situation. About 350 office staff and more than 1,000 drivers weren't even given our walking papers.

"We were getting paid by direct deposit every two weeks. In the last week I worked, from December 1 to 15, we got our checks in the mail. I didn't think that was unusual, because we had lots of work. But the check bounced.

"I couldn't believe it was happening until I saw my manager packing his personal belongings into boxes. He said the operation was suspended and we should leave—just walk away. That happened December 22, so we worked from December 1 to 22 without pay. And they also owe us vacation pay and sick pay.

"I went to the Texas unemployment office and registered for benefits. At the same time, I'm looking for a new job. I also filed an application with the Texas Work Force and they asked me a lot of questions, including how much the company owes me, and I also have to prove that the check bounced. I faxed the bounced check to them, along with a lengthy questionnaire about how my job was terminated.

"I don't know how many lawsuits Arrow has against them now, but I don't think they are going to settle anytime soon.

More TEXAS EMPLOYMENT LAW News
"Apparently the Texas Work Force is going to look into Arrow Trucking and try to get compensation for us, but I'm not holding my breath—it doesn't look like they are going to cooperate. I need to know if there is any way to speed up this process; perhaps a Texas employment lawyer can shed some light on this situation. "

Arrow Trucking's CEO released a statement in December: "The company has been in negotiations with its principal lender. Those negotiations are continuing but the lender has elected to proceed with securing its collateral. The company is communicating with several interested parties and continues to seek a prompt resolution."

Employees at Arrow Trucking are advised to call the State Labor Commissioner at 888-269-5353 to file a claim about getting their paychecks.