Late this spring, three Texas men fell more than 100 feet to their deaths after the scaffolding they were working on collapsed at a construction site. Texas labor law, as well as other assorted safety requirements at the state and federal level, is put into place in an effort to prevent these kinds of tragedies. 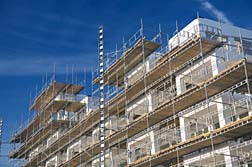 Three men employed by a Florida-based contractor were working at the "21 Rio" project on Rio Grande Street in Austin, Texas, when the scaffolding gave way. "The supported scaffold from which employees were working collapsed, causing workers to fall more than 100 feet to their death," said Eric Harbin, the US Department of Labor's Occupational Safety and Health Administration (OSHA) area director in Austin. "If scaffolding parts had been inspected and replaced or repaired as needed, it is possible that this tragic accident and loss of life could have been avoided."

As part of an investigation that began June 10, OSHA cited Capoera Construction LLC of Margate, Florida for three serious violations, including failure to develop and implement a safety and health program and failure to inspect the scaffold prior to use. The company was also cited with two repeat violations for not providing adequate fall protection systems or adequately training workers to recognize scaffolding hazards.

Mast Climber Manufacturing Inc., doing business as American Mast Climbers and owner of the scaffolding, was handed a willful citation for not using scaffolds designed by a qualified person and not constructing and loading the scaffold in accordance with that design. OSHA also cited the company with eight serious violations.

Andres Construction Services LLC and Greater Metroplex Interiors Inc. were each cited with four serious violations in the incident.

More TEXAS EMPLOYMENT LAW News
A willful violation is committed with intentional, knowing or voluntary disregard for the law's requirements, or with plain indifference to employee safety and health. A serious violation is one that could cause death or physical harm that can result from a hazard an employer knew or should have known exists. A repeat violation is issued when an employer previously was cited for the same or a similar hazard within the last three years.

Proposed penalties associated with the various citations add up to more than $150,000 payable by the four contractors involved.

It is not known if the families of the three workers who died as the result of the Texas employment accident have launched legal action against the contractors on behalf of their loved ones.

Click to learn more about LawyersandSettlements.com
LawyersandSettlements.com - A trusted, independent legal news provider bringing quality news and information on legal cases and lawsuits filed in the United States of America to its readers since 2002. Over 650,000 legal help requests including Accidents, and Employment Law Cases have been forwarded to lawyers all across to the country.