More TEXAS EMPLOYMENT LAW News
A woman has filed a Texas labor law complaint against BP Products North America Inc. for allegedly discriminating against her due to her gender and age, the Southeast Texas Record reports. 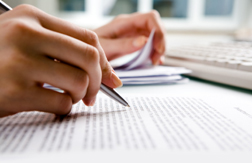 According to the news source, Texas City resident Ann Wagenfuhr filed the lawsuit on March 23 in the Galveston Division of the Southern District of Texas. The 67-year-old woman claims that BP told her in late 2009 that her administrative position was not available anymore.

Wagenfuhr, who reportedly held the job for 17 years, claims that she learned later that the position was still on BP's payroll and that bids had been sought, but not offered to her, according to the news source.

She reportedly told her superiors that she wanted to continue working in the role, was allowed to apply again but was turned down after interviewing in February, the lawsuit contends.

"Despite her impeccable service, she was not hired," the lawsuit said.

The woman is suing for mental anguish as well as economic losses, according to the news source.