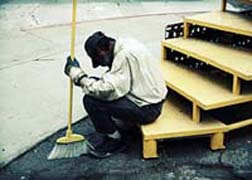 Kenneth A. Horne claims that his two supervisors discriminated against him for his mental disability, contending that they harassed him and ultimately fired him in late 2006, according to the lawsuit.

The suit, which was filed in the Galveston Division of the Southern District of Texas, claims that Horne worked for the district for 10 years prior to being fired, and that his first supervisor required him to perform a host of smaller duties such as doing laundry.

"Though developmentally challenged, Horne was also known to be a hard worker who 'did whatever you asked of him,'" the complaint states.

The lawsuit claims that Horne was frequently subjected to harassment from his peers and supervisors, including being called "stupid boy," "stupid kid" and "Forrest Gump."

According to Texas labor law, an employer "commits an unlawful employment practice" if he or she discriminates against an employee based on a disability.