More TEXAS EMPLOYMENT LAW News
The number of workplace deaths in the Lone Star State rose in the past year, which is a problem for some workers because Texas labor law does not require employers to carry worker's compensation assurance. This provision in Texas employment law makes it the only state where worker's compensation mandatory is not for employers. 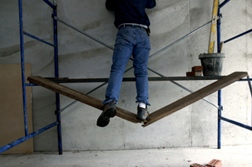 Recently released figures from the US Department of Labor showed that there were 480 reported workplace deaths in Texas in 2009, marking a 3.6 percent increase over the previous year.

While employers in Texas are not required to carry worker's compensation insurance, it might be a good thing for them to have, according to a news release.

"Taking a smart, informed approach to workers' compensation insurance will not only protect employees and minimize risk for the long term, it will also protect Texas businesses from being exposed to potentially crippling costs in a time of economic uncertainty," said Hale Johnston, senior vice president and regional manager of the Western Region for Employers Holdings, an insurance provider.

The Bureau of Labor Statistics recently reported that workplace deaths nationwide declined by 17 percent in 2009.