Moody International Development, whose clients include major oil companies like Exxon, BP, Mobil and Chevron, may owe thousands of dollars in back pay to hundreds of technical workers. "I have one plaintiff, for example, who worked 160 hours in a single pay period," says attorney Charles Branham. "That is the equivalent of two eighty-hour work weeks, and they didn't get paid overtime. That is an egregious violation." 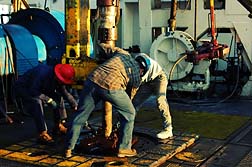 "An employee cannot waive that right. The employer has to pay overtime."
Branham has filed an overtime class action suit on behalf of all workers currently and formerly employed by Moody International as technical inspectors. "That's a fancy way of saving they were called out to do inspections for various energy producers and manufacturers to make sure the boilers were working right," says Branham.

"Workers are not paid overtime unless the underlying client agrees to pay them overtime," says Branham, holding up his copy of the Moody International employee handbook. "And of course, these clients usually don't," he adds.

Moody's policy of not paying overtime for hourly wage workers is "a clear violation of the Fair Labor Standards Act—which says you have to pay hourly workers time and a half for any time they work over forty hours," says Branham. "What makes this an even more egregious situation is that they put in their policy documents that they don't pay overtime. That is really not an option. The federal government regulator ruled on this. They have to pay overtime. An employee cannot waive that right. The employer has to pay overtime."

Branham's Houston office has been in touch with a number of current Moody International workers who are nervous about joining the class for fear of losing their jobs. However, there are very clear consequences for employers who try to influence workers involved in labor violation suits.

More TEXAS EMPLOYMENT LAW News
Thousands and thousands of dollars in back pay are at stake. "It will depend on how many hours overtime they worked," says Branham. "But they are entitled to back pay for least two years—and if the court finds this was a willful violation then workers are entitled to three years back pay plus liquidated damages."

"Liquidated damages" essentially means that that the "damages would be doubled," Branham says.