An all-terrain vehicle that may be more familiar to people lying on its side than on all four wheels is the subject of yet another lawsuit alleging a dangerous design, as users of the popular Yamaha Rhino ATV continue to suffer serious injuries, or even death. 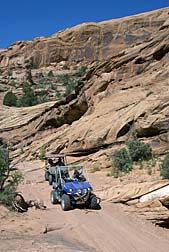 Ryan Rogers, of Bossier City, Texas claims that he was injured in a car accident while riding in a Yamaha Rhino that rolled towards the passenger side. While his suit does not specify his injuries, or break out the alleged defects of the vehicle in which he was riding when injured, the lawsuit is just one of hundreds that have cited Yamaha, and the Rhino ATV for design flaws such as a high center of gravity and tires that are too narrow—attributes which are said to invite rollover accidents, even at relatively low speeds and on relatively flat surfaces.

The Rhino has taken a huge bite out of the ATV market with its side-by-side design. A roll cage with a roof, and a small box in back for hauling, gives the Rhino an appearance akin to a small pickup truck, and the vehicle has been flying from dealers.

However, it seems that people have also been flying out of the machines at an alarming rate. Besides an alleged propensity for rollover, the vehicle was initially designed without doors, and a foot well insufficient to keep limbs inside the vehicle during a rollover condition. Riders have suffered horrid injuries to their limbs after legs and arms have been crushed during rollover accidents. Children have been ejected, and have died after the vehicle in which they were happily riding suddenly turned sinister and fell on top of them, killing them instantly.

Last August Yamaha offered to retrofit all existing Rhinos with doors going back four years, and have re-stated the need for seat belts and helmets. Seatbelts are provided in the units.

However, a seat belt did not help one of two people killed in February, in two separate accidents within minutes of each other at the Imperial Sand Dunes Recreation Area in California. Stephanie Ann Katin, 26, was killed after she was partially ejected from a rented Yamaha Rhino piloted by her husband. Both riders were wearing seat belts, but the restraint did nothing to help Katin. Her husband was not injured.

A mere 90 minutes later, in a second crash, a 14-year-old boy was killed at the same recreation area after he was ejected from the Yamaha Rhino ATV in which he was a passenger, and the roll cage of the vehicle landed on top of him. The accident happened after the driver's boot became lodged under the brake pedal, putting pressure on the accelerator. The Rhino picked up speed as the driver struggled in vain to free his foot, sending the vehicle over a sand dune, where it landed on its front bumper and ejected the 14-year-old passenger. Richard Erl Masse died from head injuries in hospital. He was not wearing a seat belt.

More TEXAS CAR ACCIDENT News
However, Stephanie Katin was. And there have been numerous instances where operators and their passengers have done all the right things. They have worn the harnesses, and worn the helmets, and have still suffered horrible injuries when an alleged top-heavy design, with narrow tires and a high center of gravity, has contributed to rollovers at relatively low speeds, and on flat surfaces. Legs and arms have been crushed in vehicles that were sold without doors, or with doors that are allegedly of insufficient size to prove effective in keeping limbs inside the cabin.

Rogers, of Bossier City, alleges that the Yamaha Rhino ATV is "in a defective condition, unreasonably dangerous" and "is not fit for its intended use and reasonably foreseeable purposes." Causes of actions filed against defendants Yamaha USA, Yamaha Manufacturing and Yamaha Motor include strict liability, negligence, and breach of warranty.

The action was filed May 27th, and is one of hundreds of lawsuits filed against Yamaha for an allegedly defective product.
READ ABOUT TEXAS CAR ACCIDENT LAWSUITS