For the men who filed testosterone lawsuits alleging they suffered serious side effects as a result of testosterone therapy, news that litigation is moving forward will be welcomed. Eight bellwether cases have been chosen and an initial trial date set for 2017. Claims surrounding testosterone therapy include allegations the therapy is linked to an increased risk of myocardial infarction and venous thromboembolism. 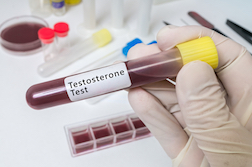 US District Judge Matthew Kennelly ordered that eight testosterone lawsuits move forward as bellwether trials. Of those, four will be lawsuits involving claims of the patient suffering myocardial infarction or stroke and four will be cases involving venous thromboembolism. All eight cases, however, involve AbbVie Androgel.

Bellwether cases are undertaken to give both sides a chance to see the arguments the other side will make and predict which way the courts will find in subsequent lawsuits. If, for example, the courts repeatedly find for the plaintiffs, the defendants might decide to offer a settlement.

According to court documents filed in support of the lawsuit, Konrad suffered a myocardial infarction on July 9, 2010, at the age of 49, despite having no medical history of heart problems. On May 5, 2010, Konrad began his use of AndroGel, which he reportedly used up to the day of his myocardial infarction.

More TESTOSTERONE TREATMENT News
On July 9, 2010, Konrad began walking on his treadmill. After about 10 minutes he experienced shortness of breath and chest pressure so he went to the hospital, where he was told he had a heart attack. Konrad was hospitalized for a day and had a stent implanted.

One of the other lawsuits approved as a bellwether trial is that of Jesse Mitchell. Like Konrad, Mitchell was 49 when he experienced a myocardial infarction. Mitchell, however, had used AndroGel for more than five years. He was hospitalized for five days, including two days spent in a coma, and suffered kidney failure. Unlike Konrad, Mitchell had other risk factors for myocardial infarction, including hypertension and a history of smoking.