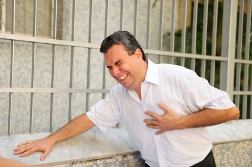 Calcification is an increase in the level of calcium in the blood. A buildup of calcium can cause soft tissues - including cardiac muscle, heart valves and arteries - to harden or narrow, resulting in reduced or restricted blood flow. This, in turn, can result in life-threatening cardiovascular problems.

For the study, researchers examined mice to analyze the role of testosterone in blood tissues. What they found suggested that testosterone could trigger calcium to build up in soft tissues, resulting in calcification. Researchers noted a “potential link between pharmacological androgen use and vascular calcification.”

More TESTOSTERONE TREATMENT News
In 2015, the US Food and Drug Administration (FDA) issued a safety announcement concerning testosterone products. In that announcement, the FDA noted that the benefit and safety of testosterone therapy has not been established for treatment of low testosterone linked to normal aging. The agency further noted that there is a “possible increased cardiovascular risk associated with testosterone use.”

Lawsuits have been filed by men alleging they were prescribed testosterone therapy but were not warned about the potential for permanent, serious side effects. Some lawsuits further allege testosterone therapy was prescribed to treat a medical condition called “Low-T,” which was not actually a medical condition but was, instead, a normal part of aging.

Posted by
Darren
on June 12, 2016
Hello Rickey Morris by the level of restriction you state on the Testosterone would suggest to me that you live in the USA.
In Canada Opiates have the highest restriction and is considered a schedule 1 drug and Testosterone is a schedule 4 drug meaning
it is not an offence to posses Testosterone for personal use

Posted by
Rickey Morris
on May 15, 2016
Because of an industrial accident and several surgeries that followed up, I make almost no testosterone of my own. My average test is 88 serum level and 2.2 on free a week after an injection of 200mg per ML at 2ML per injection of cypionate. Without injections my levels sink to almost zero in a short time. I have no energy, muscle mass leaves quickly, even breathing hard when trying to get things done is a extreme effort. Because I have Afib, SVT, and have had 5 Ablations (including one Cryo) I keep a close check on the arteries, and considering I am supposed to take these injections once per week since I don't retain it, I have at the max, a 25% buildup in my main arteries, and I'm pushing 70 years old. I believe there should be an inclusion that this mostly involves men who are normal, and think this will be a magic pill for the bedroom, and not for the Men who have a legitimate need (Medical) for taking this life changing medication. I have energy to clean and cook, and work around the house, and help Family when they need it. Without this medication, I would be sitting around, watching TV, and not cooking for myself or eating healthy. Some Lawsuits may be valid, but be very careful in your greed that you don't hurt the very people this was really meant for, instead of a Bedroom magic Bullet. It's a very restricted drug as it is, it's a higher restriction than Opiates, and carries the highest Controled Rating. More control, makes it more expensive for the people like me that need it....