The number of testosterone lawsuits consolidated for pretrial proceedings continues to grow, with almost 3,500 claims now included in the multidistrict litigation. Lawsuits allege men who were give testosterone therapy suffered serious cardiac side effects. One recently filed lawsuit accuses the defendants of fear mongering to increase profits. 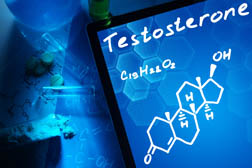 As of December 15, 2015, there were 3,481 lawsuits consolidated for pretrial proceedings in MDL 2545 (In Re: Testosterone Replacement Therapy Products Liability Litigation). That’s an additional 243 from the 3,238 that were consolidated as of November 16, 2015.

The lawsuits allege men were not adequately warned about the risk of serious testosterone side effects, including cardiac issues. Furthermore, some plaintiffs allege testosterone therapy was marketed to treat a condition called Low-T, which was in fact simply a natural part of aging.

One such lawsuit (case number 5:15-cv-02587) was filed by Timothy Wilkes and Pamela Wilkes against AbbVie Inc., concerning AndroGel, a testosterone gel. According to court documents, the defendants allegedly marketed AndroGel as being a safe and effective treatment for hypogonadism even though AndroGel is allegedly linked to life-threatening cardiac events. Plaintiffs accuse AbbVie of “disease mongering” to increase profits associated with testosterone therapy.

Included in the complaint are allegations that the defendants’ national education campaign included a “Low T Quiz,” specifically designed to be short and “somewhat sexy.” The man who allegedly wrote the quiz, Dr. John Morley, according to court documents, reportedly wrote the questionnaire - used by patients to determine whether or not they have Low T - in 20 minutes and called the questionnaire “not ideal.”

The marketing campaign apparently worked, resulting in around $1.4 billion in sales in one year, plaintiffs argue, even though in 2010 a New England Journal of Medicine study was reportedly discontinued after a high number of men in the testosterone group suffered side effects.

More TESTOSTERONE TREATMENT News
Timothy Wilkes was 54 years old when he was diagnosed with low testosterone and prescribed AndroGel. After taking the medication, Wilkes reportedly suffered multiple pulmonary emboli, severe chest pains and shortness of breath, despite having no history of respiratory or cardiac events prior to using AndroGel. He stopped using AndroGel in January 2013.

Wilkes also argues in his lawsuit that not only is he put at risk of side effects but that secondary exposure to AndroGel can cause side effects including virilization in children, physical changes in women and fetal damages in pregnant women.

Posted by
Rickey Sooter
on January 24, 2016
I believe this is a case of greed, both on Attornies side, and the people's. I have a level that averages 81 within a week of injections, and am supposed to get a shot every week but normally only get one twice a month of 2 ML, of 200 Ml per, and I have yet after years of taking it, to have any but great results. Without it, I have no energy, Muscle Mass is low, and I'm tired all the time. With it, I can function at a near normal level, and the men that take this looking for a boost in their Love life only, and don't really need it to function like any medication taken wrongly, will not only have problems but should not be allowed to sue. Let's face it, most of these guys thought it was going to make them a Tiger in the Bedroom, but didn't have any but a normal dropping of levels with age. You take too much of any hormone when it's not actually needed, and you're going to have a problem. I truly hope the Judges see through this Ambulance Chasing Scheme and denies these cases.
Posted by
Roy Banta
on January 24, 2016
I started out us Androgel I April of 2014 and after several low t tests I was switched to depo Testo 100 mg injections.Again after several low t tests it was not helping and the dosage was raised to 200mg after 1 or 2 doses I can't remember I had a stroke on 1/22/15 and have not worked since.After the stroke I am having a terrible problem with memory,have had 2 blood clots removed from my leg and some diseased veins,and think I have another clot now.I have never had this problem before.I went from a 6 figure salary to struggling now I did this to regain lost energy and never even knew there was a danger.