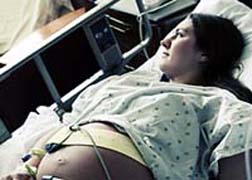 "I was pregnant with twins and at 24 weeks, I went into preterm labor," Lisa says. "They gave me a terbutaline shot and I was admitted for two to three days, during which they kept giving me shots. After that, I was put on bed rest and at least once a week for five weeks, I had to go in for a terbutaline shot. At about 29 or 30 weeks, they put me on the terbutaline pump at home. I delivered at 35 weeks.

"This was in 2003. My daughter has a non-verbal learning disorder, akin to Asperger's. She had five out of the seven characteristics to be deemed autistic. Her twin brother has major sensory issues. For example, he'll swear that lukewarm water is burning him and that running your fingers through his hair hurts him. He constantly has to touch things and crumple things up. If we go grocery shopping, he has to touch everything, and if he can't, he gets really agitated.

"In 2006, I was hospitalized for a kidney infection and the doctor heard a murmur in my heart. I was sent to the cardiologist who said I have a sticky valve, which I had never heard before.

More TERBUTALINE SULFATE News
"I didn't think anything of it until the same Asperger's group member mentioned heart damage. A mom in the group is a nurse and she told me that the FDA issued an announcement about terbutaline, so I looked into it. It was remarkable how many women in the group were on terbutaline. I wouldn't have known anything about it if the nurse hadn't told me.

"I've had some health problems that I think are linked to the heart murmur. I went to the doctor last week because of problems with breathing and chest pain. But I'm curious about if the terbutaline caused the issues my twins have. I don't believe in the whole 'vaccinations cause autism' thing, but it's curious that I was on terbutaline for so long with the twins and they both have issues, but my third child doesn't.

"I just wonder if there is a link to the neuropsychological development. It would be nice if something caused my daughter's autism that someone would help pay for the therapy. It's expensive raising an autistic child. She has sessions four times a week because she has difficulty functioning."
READ ABOUT TERBUTALINE SULFATE LAWSUITS

Posted by
Valerie
on October 30, 2017
I took terbutaline with two of my four pregnancies. I swear I have ms! One of the two children I took terbutaline for six of the nine months, that child has had physical struggles with one issue or another, learning disabilities, anxiety and depression. And now shows signs of an autoimmune condition as well. I can't get diagnosed because I have all the symptoms of ms but the test results don't prove ms. Now I'm wondering if it was the terbutaline!!! It's ruined the quality of my life and my child has suffered so much with the things listed above as well as musculoskeletal issues.
Posted by
Mura
on April 21, 2017
Looking for Moms who took terbutaline during pregnancy...are you having autoimmune issues? Weird anemia, thyroid dysfunction, muscular skeletal issues? Anemia, specifically feritin deficiency? MS, arthro, migraine, eyes , fibromyalgia, things that don't test as any one named disease? Just get lumped autoimmune?
Posted by
jenn
on May 23, 2011
Wow..... I was on terbutaline all 4 of my pregnancies.....1st was in 2000, i was put on terbutaline at 19 weeks for preterm labor... pills 4 times a day....and delivered at 27 weeks due to pre eclampsia i was told, dx with add possible aspergers. second was in 2001, preterm labor started at 20 weeks.....delivered 32 weeks what on terbutaline the whole time....he was dx with adhd...aspergers syndrome....sensory sensitive.... 3rd child 19 weeks pre term labor.... born 32 weeks.... a little bit of learning difficulty....4th pre term labor at 20 weeks, due to my history I was given a cerclage....held until 34 weeks... I took terbutaline with all of my pregnancies... all diffrent doctors prescribed it....I asked alot of questions about it with my first child and they said it had no effect on the fetus, so being 20yrs old I said ok. I have now 2 children add, adhd, aspergers syndrome.....
Posted by
Leslie
on March 14, 2011
Please get checked for peripartium cardiomyopathy. After receiving terbutaline at the end of my pregnancy I was diagnosed with it. It if a form of congestive heart failure that only affects women during pregnancy or immediately following it.