Following a total mastectomy, Lynett underwent chemotherapy with taxotere. Five years later she is in remission but Lynett won’t leave the house without wearing a wig. Her hair never grew back. 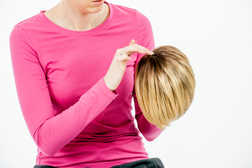 After reconstructive surgery Lynett was referred to an oncologist. He told her that she needed to undergo chemo “to increase my chances of living and the cancer not returning,” and he also said that “my hair would grow back immediately upon termination of the IV chemotherapy treatment, which was taxotere - I asked my doctor before filing a complaint,” says Lynett.

“By the third treatment, my hair began to fall out and I was completely bald by the fifth session. I felt very ashamed. It was very embarrassing not to have one hair on my head so I bought a wig. I figured, if I could just get through this year of chemo, my hair will come back...”

But Lynett had a bad response to chemotherapy. Along with hair loss, she felt sick all the time and often felt too weak to move. By the time she began to feel better from a treatment, it was time to have another one. “The biggest thing was getting my hair back,” she says. “At the beginning of 2011, peach fuzz began to grow, it wasn’t even proper hair. I have so many bald spots. When I look at myself, I see Bozo the Clown’s hair - just on the sides. That is how my hair is now.”

When the chemo ended, Lynett had a follow-up with her oncologist. He reasurred her that the hair loss was only temporary. Taxotere lawsuits allege that Sanofi, the manufacturer, failed to warn doctors that the drug could cause permanent hair loss, or alopecia. Lawsuits also claim that Sanofi hid research linking Taxotere to toxic side effects.

More TAXOTERE HAIR LOSS News
“I hyperventilate at the thought of someone seeing me without my wig on,” Lynett says.
“I used to have a full, thick head of hair that I wore past my shoulders. I always thought it would grow back, but five years later, I had my doubts. Then I saw a TV commercial about Taxotere side effects and it clicked. Why wasn’t I offered an alternative treatment?”

Lynett was on disability during her chemotherapy but she has since returned to work. “I just want to be back to normal. Thank god my family is supportive - my daughter even offered to shave her head in solidarity,” adds Lynett.

Even back at work, she can’t afford a good wig. “If someone can come up with a way to put my hair back such as a transplant, I would be forever grateful, but I couldn’t even afford it.” Perhaps Sanofi could buy Lynett a good wig and a hair transplant. In 2009, the year Lynett was diagnosed with breast cancer, Taxotere made over $3 billion for Sanofi.

Posted by
sandra
on April 10, 2016
I took the chemo texotere my hair came back but falls out and grow than fall out it only grow a certain length and it made me very sick