Taser Death "Could Be Considered to Be Torture"

The Taser-related death of a 21-year-old man in January 2008 ended in the indictment of the Winnfield, Louisiana police officer who administered nine jolts to Baron "Scooter" Pikes—many of them while Pikes was handcuffed, and two after he was already unconscious. 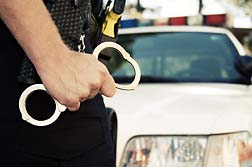 A hearing is scheduled for Monday, during which District Court Judge John Joyce is expected to rule on various video and documentary evidence and make decisions with regard to expert witnesses. The manslaughter trial of Officer Scott Nugent is set to begin February 9.

According to the police version of the incident, Pikes resisted arrest on an outstanding warrant after police spotted him walking down the street on January 17, 2008. He took off running but was apprehended outside a nearby grocery store, at which point Nugent subdued him with a shock from his Taser.

Winnfield police reported that the suspect fell ill en route to the police station, complaining that he suffered from asthma and was high on crack cocaine and PCP. A call for an ambulance proved to be in vain. Pikes died later in hospital.

However, Nugent—who was let go from the police force four months after the incident—wrote in his police report that Pikes did not resist arrest, as previously stated. The suspect was handcuffed on the ground and was not Tasered until he refused a command by the police officer to stand.

According to the 1/17/08 issue of the Chicago Tribune, Nugent claimed to have administered the first of nine Taser jolts into the middle of the victim's back. Nugent allegedly continued to Taser the man after he fell down and refused to get back up.

Eyewitnesses who were at the grocery store at the time reportedly told Pikes' family that the man had pleaded with the police officer, "Please, you all got me. Please don't Tase me again."

The Winn Parish coroner, Dr. Randolph Williams, indicated that police records showed Pikes was Tasered a total of nine times in 14 minutes. The final two Taser jolts, reportedly administered as officers pulled the suspect from the patrol car, were aimed at an unconscious man and could not have elicited an physical reaction, said Williams.

Williams' report indicates there were no drugs in Pikes' system at the time of his arrest, a contradiction of the official police report. The victim also did not suffer from asthma.

The official death certificate lists the cause of death as "cardiac arrest following nine 50,000-volt electroshock applications from a conductive electrical weapon."

In June of 2008, five months after Pikes' death, Williams ruled the man's death a homicide, following consultations with the nationally prominent forensic pathologist Dr. Michael Baden, who told the Chicago Tribune that the Taser death case "could be considered to be torture."

More TASER DEATH News
Williams, a veteran coroner with 33 years' experience in Winn Parish, said, "This case may be the most unnecessary death I have ever had to investigate. [Pikes] put up no fuss, no fighting, no physical aggression. The Taser was not used to take him into custody. He just didn't respond quickly enough to the officer's commands."

As of July 2008 the official Winnfield Police Department policy on Taser deployment decreed that the weapon is deployed only "in circumstances where it is deemed reasonably necessary to control a dangerous or violent subject." Tasered suspects are also required to be checked out immediately at a hospital.

"God did not just call this young man home," said Williams. "Fourteen minutes elapsed between the first shock and the last. If somebody can tell me anything else that killed this otherwise perfectly healthy young man in 14 minutes, I'd like to know it."

Click to learn more about LawyersandSettlements.com
LawyersandSettlements.com - A trusted, independent legal news provider bringing quality news and information on legal cases and lawsuits filed in the United States of America to its readers since 2002. Over 650,000 legal help requests including Civil & Human Rights Cases, and Personal Injury Cases have been forwarded to lawyers all across to the country.