A county judge will allow a legless man to go to trial on charges of domestic violence after an investigation into alleged Taser abuse provided ample evidence against him. 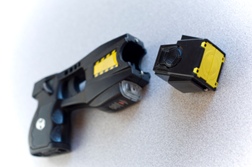 Gregory Williams, a 41-year-old Merced man whose legs are amputated below the knees, was arrested on allegations of beating his wife on September 11 of last year. Prosecutors claim that Williams struck his wife with a broomstick during an argument, jumping on her and attempting to strangle her, according to the Modesto Bee.

Police reports claim that Williams was unruly at the time of his arrest, leading the officers to use a Taser to subdue him - the investigation of which turned up eyewitness accounts and photographs of Williams' abuse of his wife.

Williams' wife, Demetrice Shunt'e Pfifer, is also facing charges of domestic violence stemming from a 2004 arrest during which she was accused of beating her husband. She is currently wanted on a $10,000 misdemeanor warrant.

Judges have set Williams' bail at $50,000. The man faces three felony counts, including corporal injury to a spouse, assault with a deadly weapon and assault with intent to injure.

If you or a loved one have suffered losses in this case, please click the link below and your complaint will be sent to a personal injury lawyer who may evaluate your Taser Abuse claim at no cost or obligation.
Request Legal Help Now