An allegation of police abuse emerged late last year in Merced, California when a legless man in a wheelchair was stunned with a Taser stun gun. 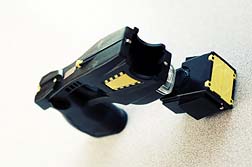 Gregory Williams, 41, and his wife have a history of domestic violence, but Williams claims that he never acted violently toward police. However, on September 11 of last year, the suspect, who is missing both legs below the knee and confined to a wheelchair, was stunned with a Taser by a police officer in an effort to subdue him.

The officer used the "dry stun" mode to subdue Williams, removing the Taser cartridge to deliver the stun through two metal contact points on the tip.

Williams tells the Merced Sun-Star that the Taser was administered without just cause and that he is proceeding with legal action against the police department. The suspect claims he was also humiliated when his pants fell down in the course of being restrained and handcuffed, exposing his private parts to onlookers in the street.

The internal police investigation into the incident is ongoing. The Merced Chief of Police said in September that both officers dispatched to the incident appear to have followed correct protocols. There were reports of domestic abuse and drug use in front of a two-year-old child, and police say the safety of the child and abuse victim were paramount.

Williams has a court date for February. In the meantime, Taser abuse continues to be a lightning rod for debate.

Amnesty International confirms that officers are using the Taser on people who are not a physical threat to police. There have been reports of police using Tasers on children and individuals with health issues, for whom a 50,000-volt Taser shock poses a significant danger.

If you have suffered losses in this case, please send your complaint to a lawyer who will review your possible [Taser Abuse Lawsuit] at no cost or obligation.
Request Legal Help Now