Steve is a typical guy, believing if you ignore the pain it will eventually go away. And don’t bother going to the doctor. But Steve wasn’t true to form when it came to his recalled Stryker hip. He went back to the surgeon, got a blood test for metallosis and filed a Stryker hip replacement lawsuit. 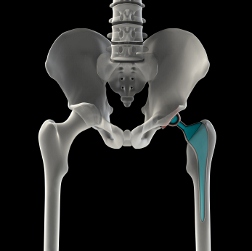 Steve, age 68, describes himself as fairly active, and he says that Stryker has “really messed up” his and his family’s life since getting a hip replacement in 2009. He is scheduled for revision surgery this August.

“My Stryker hip was great for some time and it’s hard to pinpoint when I first had problems because I thought the pain was due to not working out enough,” says Steve. “Probably late last year it really started acting up - if I stood a certain way or sat for some time and got up, the pain was so bad I had to stand slowly, and only then it would eventually ease.

“I figured I should call my surgeon, but he beat me to it. I got a letter from him this past February advising me that my Stryker hip was one that the company voluntarily recalled. I knew about the recall but never attributed my pain to the hip. My surgeon was concerned about metallosis so he did an evaluation and I had a thorough physical exam. Because I have a pacemaker I couldn’t get an MRI to detect metallosis - the definitive test to evaluate metal levels - but he said my cobalt level (he just concentrated on that because it does the most damage) was in the ‘high end of acceptable’ range, meaning I would have to follow up.”

Steve also followed up at the VA hospital, where he had a CT Scan of the entire hip area and more blood tests, which this time showed a cobalt level of 8.4 parts per billion - 20 times over the accepted level.

“That’s when I got pissed off with Stryker,” says Steve. “My wife went back to the surgeon with me and we had a long talk. By this time I was having a lot more pain in the joint area, right buttocks and upper thigh. While the pain is not debilitating, it is now constant and I need revision surgery.

“I got a claim number with Stryker and they referred me to a third party company that is handling all the claims - theoretically they will reimburse me for mileage and other costs plus they will pay for all diagnostics and the revision surgery. In my case, Medicare gets billed and Stryker is supposed to reimburse them but I have no way of knowing that. Who tracks the paper trail to make sure Stryker does pay Medicare? Who knows how that will turn out…”

Good question. Steve says he isn’t the type of guy to sue but Stryker has rubbed him the wrong way - pun intended. “I am really angry at Stryker because this recalled hip was approved without any testing,” Steve says. “A medical device company can have a hip like one already on the market by another company and then it gets approved, which gives them a legal shield. And I am pissed off with the FDA for even coming up with this 501K process.

“I gather from the Stryker recall lawsuit that Stryker may settle, but who knows for what amount. I haven’t made a decision yet
but I am talking to attorneys as a result of filing a claim with LawyersandSettlements.
Stryker messed up my whole summer and a whole lot more: revision hip replacements don’t always have the same results as the original. I researched that hip revisions have a higher percentage of problems: My surgeon has been approved to perform revision surgery with Stryker and to date he has performed about 50 surgeries with at least two having serious outcomes. (I got that information from the law firm.)

More STRYKER ORTHOPEDICS REJUVENATE News
“My attorney also said that the judge handling the Stryker recall lawsuits had a meeting last week with leading attorneys to talk about putting all the cases into a MDL. He also told me that two out of ten of his clients had adverse reactions to revision surgery. So this has really changed my future: I don’t look forward to another round of rehab but there is a possibility that I could lose my leg if I don’t have this revision surgery.

“And I have to get a stress test first to make sure I am even OK for another surgery. If my surgeon makes a mistake during surgery and tells me afterwards, I would be upset but not angry, because we all make mistakes. But Stryker didn’t come clean. That whole 501K is a way to hide things from people and I am furious with this company.”