To many people, the phrase ”I never thought this would happen to me,” is all too familiar. It has been said all too often by Stryker Rejuvenate hip victims such as Frank. 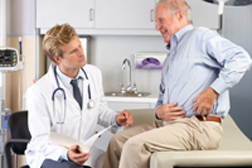 In August 2012 Frank had a Stryker hip replacement. He expected some discomfort but five days later when he returned home, the pain was unbearable. “Home Health Care visited daily and I told them something was wrong,” he says. “I was vomiting and had a fever and there was a lot of swelling around my groin area. The physical therapist told me to keep moving and the pain was normal.

I just assumed that Home Health Care would report my condition to my doctor, but that wasn’t the case. I didn’t realize this until my six-week follow up appointment. I asked the surgeon if I could have an infection or a blood clot. And I was losing weight. He just told me to drink Ensure!

To make a long story short, I did have an infection but I don’t know if it was the hospital’s fault or if it was a hip replacement failure. I was back in the hospital on antibiotics and during that time I was able to speak to another surgeon about my hip. After explaining how much pain I was in and seeing the amount of swelling, they took x-rays and discovered that the hardware was loose.”

Frank went back to his original surgeon who scheduled revision surgery, but Frank never got answers to his questions: was it a surgeon error or did he have a defective hip? Was his Stryker hip on the Stryker Orthopedics Rejuvenate Modular Hip System Recall? Back in 2012 Frank wasn’t aware of any recalls. “If I knew of any recalls, there is no way I would have allowed my surgeon to implant another Stryker device, yet that is what I am stuck with now,” Frank says. “Although the pain and swelling has gone down in the past year, I don’t think I am out of the woods yet.”

More Stryker Rejuvenate News
Stryker’s first recall occurred in 2007, when it recalled the Trident metal hip. Five years later, in June 2012 the medical device company voluntarily recalled its Rejuvenate and ABG II modular-neck hip stems after victims complained of excessive pain and swelling, reduced mobility and the possibility of metal poisoning. Many of these people needed revision surgery. Stryker’s Rejuvenate and ABG II hip replacement systems were marketed as the "next generation" and "latest evolution" in their hip replacement product lines. But to Stryker recipients like Frank, the Rejuvenate spells hip replacement lawsuit.

And like thousands of other Stryker victims, Frank claims his Stryker Rejuvenate is defective because the modular neck is prone to fretting, degradation, and fracture. He also claims that Stryker knew or should have known that the Rejuvenate and AGB II hip systems were not safe yet the company continued to market and sell the products.