One and a half million strollers sold at major retail outlets such as Wal-Mart, Target and others have been recalled over the potential for fingertip amputation. The faulty hinge design on the products has already injured a number of children. 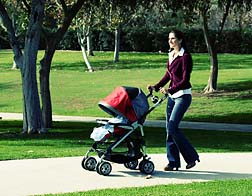 The Consumer Product Safety Commission (CPSC) announced the recall this morning. In its release, the agency cited both potential and actual fingertip amputations, together with other laceration hazards to children when the Chinese-made strollers are expanded and collapsed.

According to the Associated Press (AP), the strollers were manufactured by Graco Children's Products Inc. Based in Exton, Pennsylvania, the company has received reports of seven children suffering severe injuries after entangling their fingers in the canopy hinge.

This is the second stroller recall issued since November, when the CPSC announced that a faulty hinge mechanism in Maclaren strollers had caused 12 children to suffer fingertip amputations.

The federal safety agency is now taking a hard look at the overall design "to determine what steps need to be taken to keep children safe in and around strollers," said Scott Wolfson of the CPSC.

Brand names and models inherent with the Graco line include Passage, Alano and Spree Strollers and Travel Systems. The strollers were made in China by Graco and sold at AAFES, Burlington Coat Factory, Babies R Us, Toys R Us, Kmart, Fred Meyer, Meijer, Navy Exchange, Sears, Target, Wal-Mart and other retailers nationwide from October 2004 to December 2009.

The model numbers and manufacture dates are on the lower inside portion of the rear frame, just above the rear wheels. The recall involves strollers made between October 2004 and February 2008.
READ ABOUT FOODBORNE ILLNESS LAWSUITS