The man who was recently sentenced to 40 years for stockbroker fraud said of his alleged Ponzi scheme that all appeared to be going well with the handling of his client's money, until one day he suffered a setback. He falsified statements—only temporarily—until he was in a position to make his client's money back. But he never did. And the deception went on for years until Sean Mueller's activities finally caught up with him. 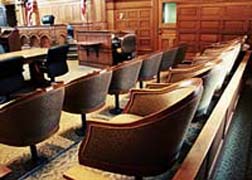 In the process, a lot of innocent people lost a lot of money.

The Denver Post, on the eve of Mueller's sentencing in December, penned an exhaustive treatment of the stock fraud story and how the likeable man was able to imbue existing and potential clients with a sense of trustworthiness. In total, according to the Denver Post, 65 investors contributed $71 million to Mueller to manage.

When it all collapsed, there was about $9.5 million of it left. Most of the millions appeared to have been spent on a lavish lifestyle for Mueller and his family. As an example of Mueller's stock broker investment fraud, he claimed to have under management $120 to $140 million at the time that his scheme collapsed.

No one suspected a thing.

The first crack appeared in Mueller's façade when a brokerage firm in the fall of 2009 noted that Mueller wasn't trading out of his account but continued to transfer funds through it. After questioning by the firm, Mueller withdrew $800,000 and simply closed the account. The firm, in turn, filed a suspicious-activity report with the US Treasury.

In the meantime, Mueller was experiencing a combination of investor withdrawals and losses that amounted, in one instance, to a $15 million loss in a single month. New money coming in was insufficient to cover the losses. At about the same time, Colorado state securities officials were tipped off to the possibility Mueller was operating a Ponzi scheme, and began investigating.

At one point, in 2008, Mueller was telling investors that one of his funds had returned 21 percent, even as stock markets collapsed.

One month before penning an e-mail to his investors saying he had lost most of their money, on April 22, he had accepted a $15 million investment from football great John Elway and Elway's business partner Mitch Pierce.

On the day of his sentencing last month, the accused told the court, "At the end of a quarter, a position went against me extremely fast, and I panicked. I sent out a fictitious statement to start this off, thinking I could make this back. It was the wrong choice.

"So a stressful job became even more so, I tried working harder. I tried trading harder. Researching harder—60 to 70 hours a week trying to make this back.

The deception continued for about eight years, according to prosecutors.

Mueller's victims, most of whom may not benefit from stock fraud arbitration, have little sympathy for the accused. One victim, whose comments appeared December 8 in the Denver Post, noted that she had sold her business and invested all the proceeds with Mueller. After losing her money, the woman is now forced to sell her home, no longer having the capacity to afford it.

Mueller pleaded guilty in November, and was sentenced December 6 to 40 years in prison for his role in the stock broker fraud. The sentence was the maximum recommended as part of a plea bargain Mueller made with prosecutors.