Many investors have lost money lately, but among those who have been forgotten are financial advisors who invested in their firm's employee stock options plans. With their companies filing for bankruptcy or being bought out by other companies, these employees are finding that the employee savings plans they paid into faithfully for many years are now almost worthless. 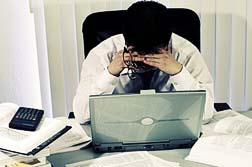 Frank M. (not his real name) says he was a long-term employee of Merrill Lynch, who now has very little to show for his time with the financial firm. "I started in March of 1982 and I retired in July of 2008," Frank says. "And, I had been very successful with Merrill Lynch—I became a first vice president and a senior financial consultant.

"About 4 years ago, I realized I had enough assets and planned my retirement for when I turned 55. The way the company was structured I had to wait until age 55 to retire—I could not retire earlier. So, with management's blessing, I sold my book of clients to another financial advisor on a 3.5 year deal, which would end when I turned 55.

"Basically, I had accumulated so much stock in the company's employee stock option plan and in the deferred compensation plan that I could afford to retire. I had some health issues and I wanted to retire at 55 and enjoy my years. My retirement assets were all in Merrill Lynch stock. During the last 3 years before retirement, I had been semi-retired. I would go in and keep up my licenses and talk to old clients to assist the seamless transfer of my long-term brokerage business. I was not there on a day-to-day basis. However, for a long time, Merrill Lynch had been a trusted firm.

"The company [Merrill Lynch] was totally mismanaged. It took a lot of risk that I had no idea about. Then came July of last year and I realized I didn't have the funds any more to retire. I went to a Merrill Lynch meeting in New York last July—my last recognition club trip—and the new guy, Thain [then chief executive of Merrill Lynch] said he wouldn't dilute the stock and told lies to seasoned financial advisors at the meeting. I came back from New York and was told that I had to retire because of my agreement. Shortly after that, Thain issued more stock—almost everything he did was the opposite to what he told financial advisors he would do.

"I wasn't surprised by that—after the New York meeting, I didn't trust him or what the executives said about the firm. Shortly after, Merrill Lynch was sold to Bank of America, and now the stock is merged at about 85 percent of 1 share. My stock is now equivalent to $5 a share—a couple of years ago it was close to $100 a share. My $4 million in Merrill Lynch stock is now almost worthless.

"I'm dissatisfied with the greed and corruption on Wall Street. Not every employee should be punished and penalized because of the executives' greed. They were paid tremendous amounts of money based on future earnings that were based on false premises. In my opinion, it's criminal. These executives should be held accountable.

"Now, I'm a small-business man and I may even have to go back to the brokerage. I have a 2-year non-compete from when I retired, even though I was forced to retire. I contacted Bank of America/Merrill Lynch and told them I want to come back and start over and they said they didn't want me back. I attribute that to my age—I was a top financial advisor. So, I've told them I want a waiver on the 2-year non-compete but they have yet to respond to me.

More ERISA News
"I had close to $4 million in my Merrill Lynch accounts. It's now worth $200,000. Two years ago, the investment was valued at $98 a share, then, when Thain was hired, the stock was in the high 60s. Now, it's about $5 a share. I worked for 27 years with integrity. My philosophy was that if you do right by people and think of their interests first, you will be successful. I had a successful clientele and I went to great pains to explain costs and risks. I never wanted anyone to have surprises. I feel that Merrill Lynch did not tell investors and employees about the risks. I think they misrepresented the financial condition of the company.

"Any stock that I could have sold, I would have if I had known the facts. I feel I was misled as an employee and a stockholder. A lot of employees are like myself—they were long-term workers who worked hard for the firms and are paying the price now because they have no retirements. The problem with the Merrill Lynch retirement system is that it was all in Merrill Lynch stock. I could not diversify. I lost money in the Merrill Lynch retirement plans, the employee stock plan and also in the employee retention plans. I was not allowed to hedge my stock positions and protect myself. I could only watch in dismay as the stock plummeted. I need the services of a sharp labor and ERISA attorney."