Lauren H. (not her real name) says she and her husband have suffered more in stock market losses than they could afford. In fact, their stock losses so far are at around $63,000, and that may not be the end of it. After all, the stock market crisis appears far from over. Lauren, like many investors, has relied on the advice of her financial advisor, but he may not have acted in her best interests. 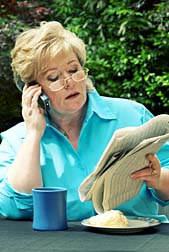 "Sixty-three thousand dollars is, for me, a lot of money," Lauren says. "It's half my money. A little over a year ago, we moved the money to AIG. It was doing very well at one point, right before we put the money in. Then, it dropped."

When Lauren and her husband combined their money and put it in AIG, they had $153,000. That dropped to $135,000, where it held for a while. However, the recent financial crisis caused the account to drop down to $128,000. At that point, Lauren and her husband took action. They asked their financial advisor to move the money out of AIG and put it in Prudential. However, before that move was made, the account dropped down to $98,000.

More STOCK MARKET LOSSES News
Although Lauren works full time, her husband is retired. She says he has lost a lot financially because of this stock crisis. "He was making between $12,000 and $20,000 a year in interest," Lauren says. "That augmented his retirement and his social security. He lost all that extra income. I don't understand it—If I could go back again, I would never have put my money in a fund like that. But now, I'm 60 years old and I have to wait it out. I don't know what else to do. It probably would have been better to just keep my money under the bed. I'd have more money right now if I'd done that.

"It's a shame because some people need that money to pay their rent," Lauren says. "We were using it for extras, but now that's gone and I don't see us getting it back for a long time. I guess everyone is just hoping this will turn around."

Many people have lost money in the stock market lately. Some were told that their investments were safe, only to learn that they were not. Others, like Lauren, say that their advisors either did not invest the money according to their instructions or did not transfer the money when they were told to. Unfortunately, these investors are now left wondering whether or not they will ever regain the money they lost.