The most recent state-sponsored terrorism lawsuit under the recently-passed Justice Against Sponsors of Terrorism Act (JASTA) was filed earlier this month, within a week of the US Presidential election. The daughters of Emeric J. Harvey, the owner of a trading company housed at the former World Trade Center who died in the 9/11 attacks, have filed a wrongful death lawsuit. 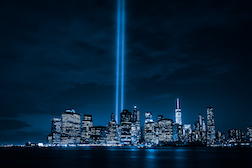 Antoinette McCarthy and Jennifer Castelano filed their government sponsored terrorism lawsuit November 15 against the government of Saudi Arabia. Two other lawsuits have been filed, one on October 17, with another filed September 30 in Washington DC, two days after the US Congress reversed a Presidential veto of the Act.

JASTA opened up the Kingdom of Saudi Arabia to liability for alleged complicity in the 9/11 attacks on the World Trade Center, and the Pentagon. And it’s not just Saudi Arabia, but any nation suspected, or alleged to have supported acts of terrorism within US borders. The Act, also known as the Justice for United States Victims of State Sponsored Terrorism Act and the associated US Victims of State Sponsored Terrorism Fund, allows victims and / or their surviving families to sue international nations for monetary damages.

“If the Saudis did nothing wrong, they should not fear this legislation,” said Senator Chuck Schumer, D-N.Y., one of the many bipartisan supporters of JASTA, in a statement in September. “If they were culpable in 9/11, they should be held accountable. The families of the victims of 9/11 deserve their day in court, and justice for those families shouldn’t be thrown overboard because of diplomatic concerns.”

So far, three lawsuits have been filed. Pundits and industry watchers suggest that plaintiffs and their state-sponsored terrorism lawsuit attorneys might have a challenging time proving their claims, and seeing their lawsuits through to their natural conclusions.

That’s because, according to industry watchers, the US government maintains the right to intervene in any JASTA lawsuit and could seek a stay to the proceedings, provided the government is “engaged in good-faith discussions with the foreign state defendant concerning the resolution of the claims against the foreign state,” leading to the potential for resolution beyond the walls of the court.

Another issue that may have stemmed the tide for would-be plaintiffs pursuing a government sponsored terrorism lawsuit is the overtures from some lawmakers who may have had second thoughts about the override of the Presidential veto.

“I'd like to think that there's a way we could fix [the bill] so that our service members do not have legal problems overseas,” noted House Speaker Paul Ryan, R-Wis., at a press briefing on September 30, “while still protecting the rights of the 9/11 victims, which is what JASTA did do.”

More STATE SPONSORED TERRORISM News
There is also some uncertainty post-election with the win by Donald J. Trump for the Republicans. While the Republicans control the House and Senate as well – and Trump having roundly criticized President Obama for issuing the veto against JASTA in the first place – there remains little illumination in the crystal ball as to the position the President-elect will eventually take, and whether JASTA will be tweaked.

For now, the three state-sponsored terrorism lawsuits stand. More may be added in the meantime, or following the transition to the Trump Administration. Be that as it may, JASTA nonetheless provides victims of the 9/11 attacks legal recourse for justice against alleged government-sponsored terrorism, recourse they did not have previously.