A new law on state sponsored terrorism may soon allow relatives of people killed in the World Trade Center terrorist attacks on Sept. 11, 2001 to sue Saudi Arabia over its alleged ties to the terror attacks. 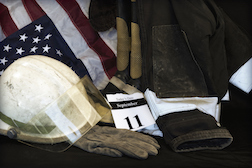 According to McClatchyDC, relatives of the 9/11 victims fought Washington and several federal judges in court for more than 14 years for the right to sue Saudi Arabia and the Royal Family in Riyadh. Both are suspected by victims' families and senior members of Congress of providing funding and other support to the 19 attackers.

District and appellate courts ruled repeatedly that "sovereign immunity," which prevents American courts from having power to hear lawsuits against other nations, stopped the families from suing Saudi Arabia, according to McClatchyDC.

However, the families' hopes were renewed in Sept. 2016 when the House voted overwhelmingly to pass the Justice Against Sponsors of Terrorism Act (JASTA), which narrowed the scope of foreign sovereign immunity, and the bill became law.

According to JASTA: "A US national may file a civil action against a foreign state for physical injury, death, or damage as a result of an act of international terrorism committed by a designated terrorist organization."

The 9/11 victims' families will head to court in the coming weeks and are seeking damages that legal experts say could exceed $1 trillion, according to McClatchyDC.

According to McClatchy, the law firms, which have already donated tens of millions of dollars to the cause, are working pro bono and hope to recoup payment through a large settlement with the Saudi government.

“It is inevitable that the time will come, hopefully in the not-too-distant future, when the Saudis will have to answer these allegations in court.”

Click to learn more about LawyersandSettlements.com
LawyersandSettlements.com - A trusted, independent legal news provider bringing quality news and information on all legal cases and lawsuits filed in United States of America to its readers since 2002. Over 250,000 legal help requests including Civil & Human Rights Cases, Financial Cases, and Personal Injury Cases have been forwarded to lawyers all across to the country.