As lawsuits continue to circulate through the courts in the wake of the Stand 'n Seal dangerous product recall, more information is coming to light that casts an even darker shadow on the product, and the dubious efforts of the manufacturer and distributor to warn the public against a serious personal injury hazard.

Perhaps most damning is the revelation that builders and contractors were warned to wear breathing apparatus when using the product, whereas consumers were not.

Tile Perfect Stand 'n Seal is an aerosol grout and tile sealer manufactured by Roanoke, (now BRTT). Distributed exclusively through Home Depot, the product proved a hit with consumers until a BRTT supplier switched the active ingredient from one supplied by Dupont, to a chemical provided by a small, independent manufacturer. 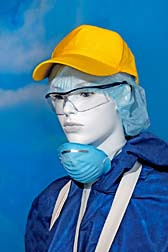 The switch, to a chemical known as Flexipel S-22WS, lay at the root of all the trouble. According to the chemical manufacturer, Innovative Chemical Technologies (ICT) of Cartersville Georgia, Flexipel S-22WS was not designed to be used as an aerosol, given that it could cause respiratory difficulty.

However BRTT, once it became aware of the ill-advised switch allowed the change to go forward, allegedly without updating their consumer precautions. Marketing materials visually depicted consumers happily applying the aerosol tile grout without breathing apparatus, adjacent to a closed window in an un-ventilated room.

And yet, a required safety data sheet prepared for use by builders and contractors warned against use of the product in restricted areas with poor ventilation, and required the use of an approved organic cartridge respirator. The fact sheet also warns against breathing in vapors.

However, there was no such safety document prepared for consumers. What's more, while the product label warns against breathing in the vapors, the lettering used is smaller than text, which promises the spray "evaporates harmlessly."

The US Consumer Product Safety Commission notes that product data sheets are prepared for workers with the potential to be exposed eight hours per day, seven days per week. However, the small print on the Stand 'n Seal label suggests that exposure over an extended period of time is not the only recipe for respiratory disaster, and the dozens of calls to poison centers back up the observation that a single, unprotected exposure is all that's necessary to put a consumer in the hospital.

That happened to dozens of people. And two people died.

The Stand 'n Seal debacle appears to be a classic case of a fall through the cracks, perhaps with a push for good measure.

First, the formula was changed to include a different active ingredient, apparently with respiratory issues the original formulation did not possess. The manufacturer of Stand 'n Seal, BRTT defended its product at the time by claiming that a contractor had failed to include 'an odor' that would alert the consumer to the presence of the dangerous vapor which, it is suggested, was odorless in its original form.

Then, over the late spring and summer of 2005 when calls to poison control centers were confirming a problem with Stand 'n Seal, internal BRTT documents were suggesting that the manufacturer wanted to do everything in its power to keep the product on Home Depot store shelves. However, within days it became obvious to BRTT that too many people were being hospitalized, and about mid-July of that year BRTT quietly ordered about 300,000 cans of the product from store shelves, according to an investigative report by CBS4 TV out of Denver, Colorado.

However, it wasn't until six weeks later that the first public warnings, together with a formal voluntary recall, were announced.

More News
Home Depot is on record as saying it made every effort to comply with the recall, and at no time knowingly vended cans associated with the recalled lot numbers after the recall was announced.

But at least one consumer claimed that a recalled can was purchased after the recall.

What's even more damning, is that replacement cans that supposedly addressed the respiratory issue, were found to contain the very same formulation as the initial, recalled lots. The only change was the addition of an odor to signal to the consumer the presence of fumes, however this addition did not remove the hazard.

Tile Perfect Stand 'n Seal was eventually recalled completely this past spring. In the meantime, as the issue unfolds and more information becomes available, more lawsuits are reverberating through the courts.