A recent St. Louis motorcycle accident killed a man when his bike crashed into a utility truck. 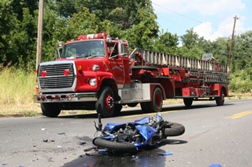 Perry Herndon sustained critical injuries when his motorcycle crashed into a Ameren UE utility truck at Riverview and Chambers at a high speed, according to Fox 2 St. Louis. The utility truck was turning onto Chambers when the accident occurred.

The 42 year old was taken to a nearby hospital, where he died a short time later, according to the news source.

Police report that the 61-year-old truck driver was not injured in the collision with the motorcycle.

Authorities told the news provider that the street lights along Riverview and Chambers were not working at the time of the accident.

There were 960 roadway fatalities in Missouri during 2008, according to the National Highway Traffic Safety Administration. That total was the 13th highest in the nation. California had the most traffic-related deaths in the nation in 2008 with 3,434, followed by Texas with 3,382 and Florida with 2,978.

If you or a loved one have suffered losses in this case, please click the link below and your complaint will be sent to a personal injury lawyer who may evaluate your St. Louis Motorcycle Accident claim at no cost or obligation.
Request Legal Help Now